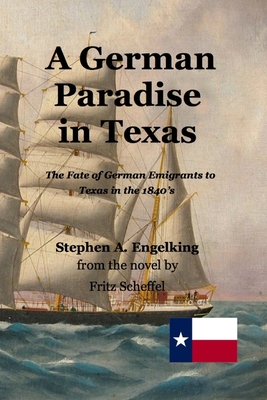 After discovering a copy the German novel, Deutsche suchen den Garten der Welt--Das Schicksal deutscher Auswanderer in Texas vor 100 Jahren nach Berichten erz hlt von Fritz Scheffel, the almost lost and fascinating story of the German Texas pioneers was republished originally in German in order to make it available once again to German readers. The book was originally published in 1937 and is written in a style and with elements of the German nationalistic culture of the time. It seems that the novel had almost been forgotten and hardly appears in any information about Scheffel.
In the meantime, there are unfortunately hardly any German speaking Texans left and the descendants of those pioneers have no access to this literary and historical work which, whilst it is a good story, it is very close to the real history of Texas of the 1840's and has the potential to bring history alive to them.

The book has been recomposed into English rather than leave it as a pure translation. However, the original flavor and the storyline of the novel have been retained, making it more accessible to the average American today.

END_OF_DOCUMENT_TOKEN_TO_BE_REPLACED

This feature require that you enable JavaScript in your browser.
END_OF_DOCUMENT_TOKEN_TO_BE_REPLACED

This feature require that you enable JavaScript in your browser.
END_OF_DOCUMENT_TOKEN_TO_BE_REPLACED

This feature require that you enable JavaScript in your browser.
END_OF_DOCUMENT_TOKEN_TO_BE_REPLACED