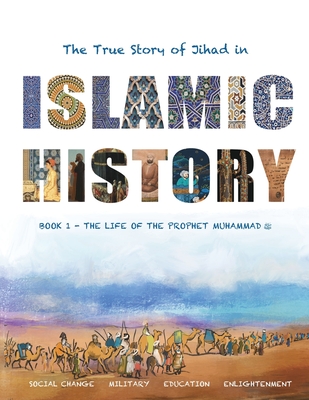 This is book one of a fascinating three three-part series on Islamic History.

For too long, the word 'Jihad' has been misunderstood, not only by the West but by Muslims themselves. This book goes back to the very beginning of Islam when the Prophet Muhammad ﷺ successfully transformed and enlightened Arab society and exemplified the true meaning of Jihad - of striving for excellence. Not only in his actions but in character as well.

Islamic scholars have identified for main types of Jihad - Jihad of social change, Jihad of education, Jihad of character and finally the Jihad of defence, all of which the Prophet ﷺ excelled at. He not only brought peace and justice to Arabia, but he also gave women their rights, established support for the poor and hungry and guided humanity to have faith in Allah. When the Muslims were forced to defend themselves, we see how the Prophet bravely dealt with the enemy. We look at the strict rules of Islam which forbids harming civilians, livestock or even burning crops.

We then ask how young people of today can follow the noble example of the Prophet ﷺ in striving for excellence.

The book has been commended by Ahle Sunnah wa Jum'aat (the main body of Islam) scholar, Sheikh Taher as-Siddique, Michigan.

Includes 'The Battles of the Prophet Muhammad ﷺ' - Three stories written from the perspective of a young soldier in the famous early battles of Islam.

This feature require that you enable JavaScript in your browser.
END_OF_DOCUMENT_TOKEN_TO_BE_REPLACED

This feature require that you enable JavaScript in your browser.
END_OF_DOCUMENT_TOKEN_TO_BE_REPLACED

This feature require that you enable JavaScript in your browser.
END_OF_DOCUMENT_TOKEN_TO_BE_REPLACED