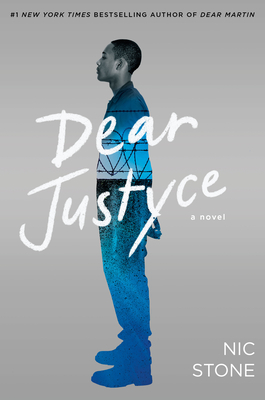 Readers met Vernell Laquan “Quan” Banks in Dear Martin and now have the chance to hear his heartbreaking story. Quan and Justyce were childhood friends and could have both gone down the same path. Instead, a series of events occurred such that Quan now finds himself in a detention center and he may be there for life. Justyce gives Quan his letters to MLK and Quan is compelled to start writing letters to Justyce. These letters unearth the truth about what has happened to Quan since he and Justyce parted ways as children and may lead to a chance to change Quan’s future.

“Wow! Nic Stone is a powerful writer who has brought us what she calls her most difficult book to write. Quan is in a detention center, writing letters to his friend Justyce about his experience being locked up. His story about how he got there is pieced together through events from his childhood leading into present day. This book, though fictional, examines the experience of being born Black and how the system is designed to the detriment of the Black population. This book should be required reading!”
— Carissa Unite, Oblong Books & Music, Millerton, NY

An NPR Best Book of the Year * The stunning sequel to the critically acclaimed,  #1 New York Times bestseller Dear Martin. An incarcerated teen writes letters to his best friend about his experiences in the American juvenile justice system.

An unflinching look into the tragically flawed practices and silenced voices in the American juvenile justice system.

Vernell LaQuan Banks and Justyce McAllister grew up a block apart in the Southwest Atlanta neighborhood of Wynwood Heights. Years later, though, Justyce walks the illustrious halls of Yale University . . . and Quan sits behind bars at the Fulton Regional Youth Detention Center.

Through a series of flashbacks, vignettes, and letters to Justyce--the protagonist of Dear Martin--Quan's story takes form. Troubles at home and misunderstandings at school give rise to police encounters and tough decisions. But then there's a dead cop and a weapon with Quan's prints on it. What leads a bright kid down a road to a murder charge? Not even Quan is sure.

"A powerful, raw, must-read told through the lens of a Black boy ensnared by our broken criminal justice system." -Kirkus, Starred Review

Nic Stone is an Atlanta native and a Spelman College graduate. After working extensively in teen mentoring and living in Israel for several years, she returned to the United States to write full-time. Nic's debut novel for young adults, Dear Martin, was a New York Times bestseller and William C. Morris Award finalist. She is also the author of the teen titles Odd One Out, a novel about discovering oneself and who it is okay to love, which was an NPR Best Book of the Year and a Rainbow Book List Top Ten selection, and Jackpot, a love-ish story that takes a searing look at economic inequality.

Clean Getaway, Nic's first middle-grade novel, deals with coming to grips with the pain of the past and facing the humanity of our heroes. She lives in Atlanta with her adorable little family. Find her online at nicstone.info or @nicstone.

"A powerful, raw must-read told through the lens of a Black boy ensnared by our broken criminal justice system.” —Kirkus Reviews, starred review

"This book expands the conversation about systemic racism to include young men of color who don’t fit the demands of respectability politics.... A nuanced perspective on the juvenile justice system." —SLJ

“Teens can relate to the feelings of alienation, loneliness, and confusion that lead Quan to make many of the choices that he does, even as the book explores the various ways our current justice system disenfranchises young people of color.” —The Horn Book

"Absolutely incredible, honest, gut-wrenching. A must read!" —Angie Thomas, #1 New York Times bestselling author of The Hate U Give

This feature require that you enable JavaScript in your browser.
END_OF_DOCUMENT_TOKEN_TO_BE_REPLACED

This feature require that you enable JavaScript in your browser.
END_OF_DOCUMENT_TOKEN_TO_BE_REPLACED

This feature require that you enable JavaScript in your browser.
END_OF_DOCUMENT_TOKEN_TO_BE_REPLACED