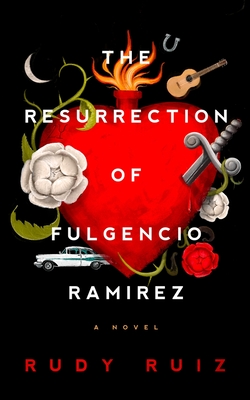 In the 1950s Fulgencio, son of poor Mexican immigrants dates Carolina, the privileged daughter of the local pharmacist. Living along the Mexico-Texas border as they do, prejudice is rampant and their relationship creates shock waves. A disastrous mistake drives them apart, and while living near each other as adults they have no contact for thirty years. Fulgencio becomes a pharmacist himself and never marries - patiently waiting for the day when he might be with the one woman he loves. When Carolina's husband dies Fulgencio begins a campaign to win her back. Moving back and forth in time, and incorporating elements of magical realism, this atmospheric and big-hearted tale will have you rooting for Fulgencio until the very end!

In the 1950s, tensions remain high in the border town of La Frontera. Penny loafers and sneakers clash with boots and huaraches. Bowling shirts and leather jackets compete with guayaberas. Convertibles fend with motorcycles. Yet amidst the discord, young love blooms at first sight between Fulgencio Ramirez, the son of impoverished immigrants, and Carolina Mendelssohn, the local pharmacist's daughter. But as they'll soon find out, their bonds will be undone by a force more powerful than they could have known.

Thirty years after their first fateful encounter, Fulgencio Ramirez, RPh, is conducting his daily ritual of reading the local obituaries in his cramped pharmacy office. After nearly a quarter of a century of waiting, Fulgencio sees the news he's been hoping for: his nemesis, the husband of Carolina Mendelssohn, has died.

A work of magical realism, The Resurrection of Fulgencio Ramirez weaves together the past and present as Fulgencio strives to succeed in America, break a mystical family curse, and win back Carolina's love after their doomed youthful romance. Through enchanting language and meditations about the porous nature of borders--cultural, geographic, and otherworldly--The Resurrection of Fulgencio Ramirez offers a vision of how the past has divided us, and how the future could unite us.

This feature require that you enable JavaScript in your browser.
END_OF_DOCUMENT_TOKEN_TO_BE_REPLACED

This feature require that you enable JavaScript in your browser.
END_OF_DOCUMENT_TOKEN_TO_BE_REPLACED

This feature require that you enable JavaScript in your browser.
END_OF_DOCUMENT_TOKEN_TO_BE_REPLACED