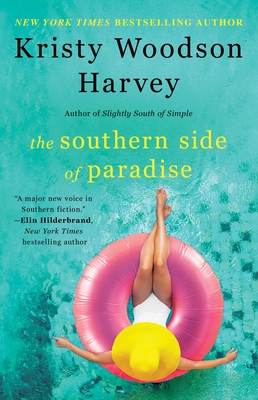 This is book number 3 in the The Peachtree Bluff Series series.

From internationally bestselling author and “rising star of Southern fiction” (Mary Alice Monroe, New York Times bestselling author) Kristy Woodson Harvey comes the third novel in her Peachtree Bluff series, in which a secret threatens the tight-knit bond between a trio of sisters and their mother.

With the man of her dreams back in her life and all three of her daughters happy, Ansley Murphy should be content. But she can’t help but feel like it’s all a little too good to be true.

Meanwhile, youngest daughter and actress Emerson, who is recently engaged and has just landed the role of a lifetime, seemingly has the world by the tail. Only, something she can’t quite put her finger on is worrying her—and it has nothing to do with her recent health scare.

When two new women arrive in Peachtree Bluff—one who has the potential to wreck Ansley’s happiness and one who could tear Emerson’s world apart—everything is put in perspective. And after secrets that were never meant to be told come to light, the powerful bond between the Murphy sisters and their mother comes crumbling down, testing their devotion to each other and forcing them to evaluate the meaning of family.

With Kristy Woodson Harvey’s signature charm, wit, and heart, The Southern Side of Paradise is another masterful Peachtree Bluff novel that proves she is a “Southern writer with staying power” (Booklist).

Kristy Woodson Harvey is the New York Times bestselling author of nine novels, including Under the Southern Sky, Feels Like Falling, and The Peachtree Bluff series. A Phi Beta Kappa, summa cum laude graduate of the University of North Carolina at Chapel Hill’s school of journalism, her writing has appeared in numerous online and print publications including Southern Living, Traditional Home, USA TODAY, Domino, and O. Henry. Kristy is the winner of the Lucy Bramlette Patterson Award for Excellence in Creative Writing and a finalist for the Southern Book Prize. Her work has been optioned for film and television, and her books have received numerous accolades including Southern Living’s Most Anticipated Beach Reads, Parade’s Big Fiction Reads, and Entertainment Weekly’s Spring Reading Picks. Kristy is the cocreator and cohost of the weekly web show and podcast Friends & Fiction. She blogs with her mom Beth Woodson on Design Chic, and loves connecting with fans on KristyWoodsonHarvey.com. She lives on the North Carolina coast with her husband and son where she is (always!) working on her next novel.

"Kristy Woodson Harvey has done it again! Perfectly tying together the stories of Ansley, Caroline, Sloane, and Emerson (and their men!), The Southern Side of Paradise is full of humor, charm, and family. Fans of the Peachtree Bluff series will not be disappointed!"
— Lauren K. Denton, USA Today Bestselling Author of Hurricane Season

"I devoured The Southern Side of Paradise. Kristy Woodson Harvey spins a deliciously authentic Southern tale of family and the often messy, complex relationships between sisters, mothers, and daughters. This book is the perfect beach read."
— Susan Boyer, USA Today Bestselling Author of Lowcountry Boil

“As the eldest of three sisters, I know you’re not supposed to pick favorites—but The Southern Side of Paradise is Kristy Woodson Harvey’s very best. The heartwarming finale to the Peachtree Buff series, this novel had me laughing, crying, and wanting to hop on a plane and head south. I loved every page.”
— Camille Pagán, bestselling author of I’m Fine and Neither Are You

"With every installment of the Peachtree Bluff Series, I fall in love all over again with the charming Murphy women and the charismatic men in their lives. The love these three sisters and their devoted mother have for one another binds this family together through thick and thin. And there is plenty of thick in this action-pack drama to hold you spellbound until the last word. One can only hope we’ll see more from this unique cast of characters and their magical Southern coastal town in the future."
— Ashley Farley, author of the bestselling Sweet Tea Tuesdays

“Woodson Harvey has been called a major voice in Southern fiction, and her latest novel—the third in the Peachtree Bluff series—delivers a healthy dose of her signature wit, charm, and heart.”

END_OF_DOCUMENT_TOKEN_TO_BE_REPLACED

This feature require that you enable JavaScript in your browser.
END_OF_DOCUMENT_TOKEN_TO_BE_REPLACED

This feature require that you enable JavaScript in your browser.
END_OF_DOCUMENT_TOKEN_TO_BE_REPLACED

This feature require that you enable JavaScript in your browser.
END_OF_DOCUMENT_TOKEN_TO_BE_REPLACED