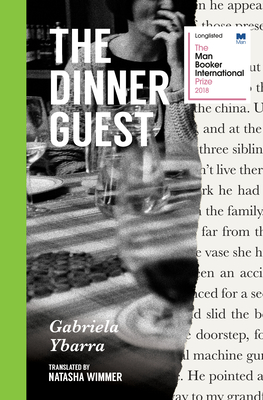 By Gabriela Ybarra, Natasha Wimmer (Translator)
$15.95
On Our Shelves Now

A grandfather’s abduction and murder.  A mother’s death. Two grim events are jumping off points for this remarkable debut autobiographical novel. Ybarra first learns of her grandfather’s murder as a young girl, but her family, one of the ruling class families in the Basque region of Vizcaya, chooses not to talk about it afterward - nor do they speak of the threats that the next generation lives with.  As a young woman, feeling unmoored after taking care of her mother during her ultimately fatal illness, Ybarra is moved to learn more about her family’s legacy. “My private life is still political”, she realizes, and this fictionalized account of her journey toward understanding is filled with raw emotion and luminous reflections. Longlisted for the Man Booker International Prize in 2018, The Dinner Guest will break your heart and then, exquisitely, restore it.

"A seamless blend of art, politics, and private life."--NPR

The Dinner Guest is Gabriela Ybarra's prizewinning literary debut: a singular autobiographical novel piecing together the kidnap and murder of her grandfather by terrorists, reflecting on the personal impact of private pain and public tragedy.

The story goes that in my family there's an extra dinner guest at every meal. He's invisible, but always there. He has a plate, glass, knife and fork. Every so often he appears, casts his shadow over the table, and erases one of those present.

The first to vanish was my grandfather.

In 1977, three terrorists broke into Gabriela Ybarra's grandfather's home, and pointed a gun at him in the shower. This was the last time his family saw him alive, and his kidnapping played out in the press, culminating in his murder.Ybarra first heard the story when she was eight, but it was only after her mother's death, years later, that she felt the need to go deeper and discover more about her family's past.

The Dinner Guest is a novel with the feel of documentary non-fiction. It connects two life-changing events--the very public death of Ybarra's grandfather, and the more private pain as her mother dies from cancer and Gabriela cares for her. Devastating and luminous, the book is an investigation, marking the arrival of a talented new voice in international fiction.

END_OF_DOCUMENT_TOKEN_TO_BE_REPLACED

This feature require that you enable JavaScript in your browser.
END_OF_DOCUMENT_TOKEN_TO_BE_REPLACED

This feature require that you enable JavaScript in your browser.
END_OF_DOCUMENT_TOKEN_TO_BE_REPLACED

This feature require that you enable JavaScript in your browser.
END_OF_DOCUMENT_TOKEN_TO_BE_REPLACED