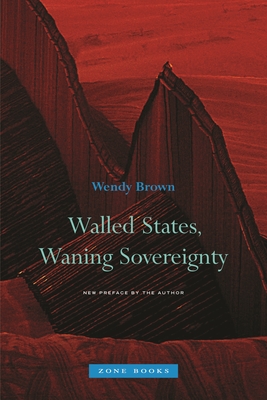 A prize-winning examination of why nation-states wall themselves off despite widespread proclamations of global connectedness.

Why do walls marking national boundaries proliferate amid widespread proclamations of global connectedness and despite anticipation of a world without borders? Why are barricades built of concrete, steel, and barbed wire when threats to the nation today are so often miniaturized, vaporous, clandestine, dispersed, or networked?

In Walled States, Waning Sovereignty, Wendy Brown considers the recent spate of wall building in contrast to the erosion of nation-state sovereignty. Drawing on classical and contemporary political theories of state sovereignty in order to understand how state power and national identity persist amid its decline, Brown considers both the need of the state for legitimacy and the popular desires that incite the contemporary building of walls. The new walls--dividing Texas from Mexico, Israel from Palestine, South Africa from Zimbabwe--consecrate the broken boundaries they would seem to contest and signify the ungovernability of a range of forces unleashed by globalization. Yet these same walls often amount to little more than theatrical props, frequently breached, and blur the distinction between law and lawlessness that they are intended to represent. But if today's walls fail to resolve the conflicts between globalization and national identity, they nonetheless project a stark image of sovereign power. Walls, Brown argues, address human desires for containment and protection in a world increasingly without these provisions. Walls respond to the wish for horizons even as horizons are vanquished.

This feature require that you enable JavaScript in your browser.
END_OF_DOCUMENT_TOKEN_TO_BE_REPLACED

This feature require that you enable JavaScript in your browser.
END_OF_DOCUMENT_TOKEN_TO_BE_REPLACED

This feature require that you enable JavaScript in your browser.
END_OF_DOCUMENT_TOKEN_TO_BE_REPLACED