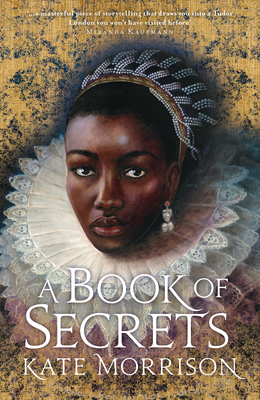 By Kate Morrison
$24.95
Email or call for price

A Book of Secrets is the story of a woman named Susan Charlewood living in Elizabethan England. Born in what is now Ghana, Susan is enslaved by the Portuguese but later rescued by British sailors, who bring her to England. Once in England, she is raised and educated in an English Catholic household.

When Susan comes of age, the family marry her off to an older Catholic man, John Charlewood. Charlewood runs a printing press and uses it to supply the Papist nobility with illegal Catholic texts and foment rebellion amongst the Catholic underclass. When Charlewood dies, Susan takes over the business and uses her new position to find out more about her origins. A look at racial relationships on the eve of the beginning of the transatlantic slave trade, A Book of Secrets is a revealing and compelling glimpse into a fraught time.

Kate Morrison is a British debut novelist was born in England. She studied English Literature at New Hall College, Cambridge and worked as a journalist and a press officer. ShecurrentlylivesinBristolwithherfamily. Morrison was mentored by Ros Barber, the award-winning author of The Marlowe Papers and Devotion. She was a visiting scholar with the Book, Text, and Place 1500-1700 Research Centre at Bath Spa University. Her short story "Sam Brown" won second prize in the 2011 Asham Award and is in the Asham Award Anthology, Something was There. A Book of Secrets was longlisted for the Mslexia Unpublished Novel Award in 2015

END_OF_DOCUMENT_TOKEN_TO_BE_REPLACED

This feature require that you enable JavaScript in your browser.
END_OF_DOCUMENT_TOKEN_TO_BE_REPLACED

This feature require that you enable JavaScript in your browser.
END_OF_DOCUMENT_TOKEN_TO_BE_REPLACED

This feature require that you enable JavaScript in your browser.
END_OF_DOCUMENT_TOKEN_TO_BE_REPLACED