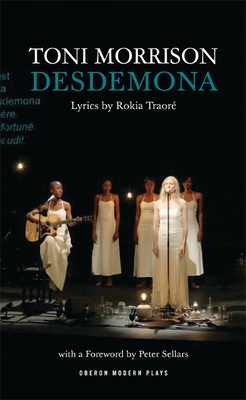 By Toni Morrison, Peter Sellars (Foreword by), Rokia Traoré (Other)
Email or call for price/availability
Out of Print

The story of Desdemona from Shakespeare's Othello is re-imagined by Nobel Prize laureate Toni Morrison, Malian singer and songwriter Rokia Traor , and acclaimed stage director Peter Sellars. Morrison's response to Othello is an intimate dialogue of words and music between Desdemona and her African nurse Barbary. Morrison gives voice and depth to the female characters, letting them speak and sing in the fullness of their hearts.

Desdemona is an extraordinary narrative of words, music and song about Shakespeares doomed heroine, who speaks from the grave about the traumas of race, class, gender, war and the transformative power of love. Toni Morrison transports one of the most iconic, central, and disturbing treatments of race in Western culture into the new realities and potential outcomes facing a rising generation of the 21st century.

Toni Morrison was awarded the Nobel Prize for Literature in 1993. She is the author of many novels, including The Bluest Eye, Beloved (made into a major film), Paradise and, most recently, Home. She has also received the National Book Critics Circle Award and a Pulitzer Prize for her fiction. Rokia Traore is an award-winning Malian singer, songwriter and guitarist. Her first albums, Mouneissa, Wanita, and Bowmboi are now classics. Her latest album, Tchamantche, took the French Victoires de la musique award for the best World Music album of the year 2009.

This feature require that you enable JavaScript in your browser.
END_OF_DOCUMENT_TOKEN_TO_BE_REPLACED

This feature require that you enable JavaScript in your browser.
END_OF_DOCUMENT_TOKEN_TO_BE_REPLACED

This feature require that you enable JavaScript in your browser.
END_OF_DOCUMENT_TOKEN_TO_BE_REPLACED