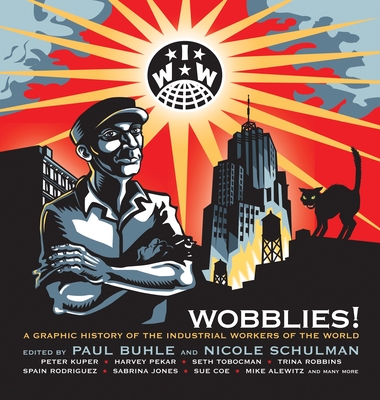 On Our Shelves Now
(This book cannot be returned.)

The IWW, which has been organizing workers since 1905, is often cited yet elusive to scholars because of its eclectic and controversial cultural and social character. Wobblies! presents the IWW whole, scripted and drawn by old-time and younger Wobbly and IWW-inspired artists.

Paul Buhle,formerly a senior lecturer at Brown University, produces radical comics. He founded the SDS Journal Radical America and the archive Oral History of the American Left and, with Mari Jo Buhle, is coeditor of the Encyclopedia of the American Left. He lives in Madison.

Nicole Schulman is an artist and activist on the editorial board of World War 3 Illustrated, to which she frequently contributes work. Her comics and illustrations have appeared in publications such as the New York Times, and are in the permanent collection of the Library of Congress. She lives in New York City.

Harvey Pekar is a comic book writer and author of the autobiographical American Splendor series, which was adapted into an Academy Award nominated film. Pekar is also a prolific jazz and book critic. He lives in Cleveland, Ohio.

Retired cartoonist and current comics historian Trina Robbins has been writing graphic novels, comics, and books for over 30 years. Her subjects have ranged from Wonder Woman and The Powerpuff Girls to her own teenage superheroine, GoGirl!, and from women cartoonists and superheroines to women who kill. She lives in a moldering 103 year-old house in San Francisco with her cats, shoes, and dust bunnies.

Spain Rodriguez is one of the most well-known artists in the comix underground. He (along with Robert Crumb) was one of the original members of Zap Comics and has a reputation as an outstanding political artist. He is the author of several other graphic novels, including the highly acclaimed Nightmare Alley. His work is prominently featured in BLAB!, an annual comic anthology that has also featured Charles Burns, Mark Mothersbaugh, Daniel Clowes, and Chris Ware.

“Tell the bosses to go to hell and buy an extra copy of this wonderful history. Give it to an exploited friend or just leave it in a public place. On the centenary of the IWW, we should be replanting the seeds of rebellion.”—Mike Davis

“Wobblies! is a magnificent commemoration of the IWW centenary. The book reminds us that the Wobbly way of direct action and solidarity is as relevant today as it’s ever been. Get hold of the book, share it, and then go take on your boss.”—Daniel Gross

“When I was in graduate school, we longed for “Classic Comics” of some of our more inaccessible historical tomes. Paul Buhle and Nicole Schulman have gone way beyond that with Wobblies! A Graphic History. Carefully researched, interesting, informative and accessible, this book could not be more timely.”—Sara Paretsky

“America, contrary to what you might have been led to believe, has a deep indigenous radical tradition. Wobblies! excavates an essential part of American history that has been conveniently overlooked in recent years, and does so with style, great graphics, and no punches pulled.”—Luc Sante

“The Wobblies made a unique and remarkable contribution to American culture and the everlasting struggles for freedom and justice, with effects that reach very far, and should in the future as well. The excitement and inspiration of their creative and courageous work is brilliantly captured in this wonderful graphic history.”—Noam Chomsky

“Paul Buhle and Nicole Schulman shine an illuminating spotlight on a dimly lit corner of American history with their Wobblies! A Graphic History ... and, even better ... it’s chock full of great images. The Wobblies never stood so tall.”—Bill Griffith

“Wobblies! is an entertaining and richly instructive history of the IWW, a story told largely through illustrations whose styles vary from spare to surreal. Some of the stories and biographies are familiar, others obscure or little known. But the lessons are stark: even the most progressive activists today suffer little for their convictions, and our dreams and expectations and goals are narrow and shriveled compared to those of the Wobblies who provide our inspiration.”—David Newby

“More than a superb-looking coffee table book; it is an introduction to a critically important chapter in American history, and a graphic guide to grassroots political organizing. This book is highly recommended to fans of cartooning and class warfare.”—Kent Worcester

This feature require that you enable JavaScript in your browser.
END_OF_DOCUMENT_TOKEN_TO_BE_REPLACED

This feature require that you enable JavaScript in your browser.
END_OF_DOCUMENT_TOKEN_TO_BE_REPLACED

This feature require that you enable JavaScript in your browser.
END_OF_DOCUMENT_TOKEN_TO_BE_REPLACED