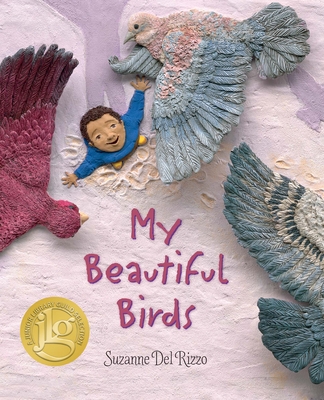 A New York Times Notable Children's Books selection. The moving story of one boy's refugee experience in the Syrian Civil War and the birds who help him on the road to emotional healing

Behind Sami, the Syrian skyline is full of smoke. The boy follows his family and all his neighbours in a long line, as they trudge through the sands and hills to escape the bombs that have destroyed their homes. But all Sami can think of is his pet pigeons--will they escape too? When they reach a refugee camp and are safe at last, everyone settles into the tent city. But though the children start to play and go to school again, Sami can't join in. When he is given paper and paint, all he can do is smear his painting with black. He can't forget his birds and what his family has left behind.

One day a canary, a dove, and a rose finch fly into the camp. They flutter around Sami and settle on his outstretched arms. For Sami it is one step in a long healing process at last.

A gentle yet moving story of refugees of the Syrian civil war, My Beautiful Birds illuminates the ongoing crisis as it affects its children. It shows the reality of the refugee camps, where people attempt to pick up their lives and carry on. And it reveals the hope of generations of people as they struggle to redefine home.

END_OF_DOCUMENT_TOKEN_TO_BE_REPLACED

This feature require that you enable JavaScript in your browser.
END_OF_DOCUMENT_TOKEN_TO_BE_REPLACED

This feature require that you enable JavaScript in your browser.
END_OF_DOCUMENT_TOKEN_TO_BE_REPLACED

This feature require that you enable JavaScript in your browser.
END_OF_DOCUMENT_TOKEN_TO_BE_REPLACED