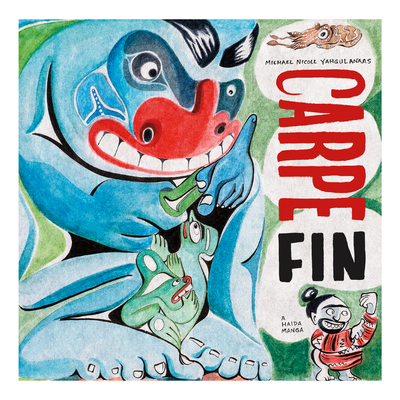 In a prequel to the award-winning Red: A Haida Manga, acclaimed artist Michael Nicoll Yahgulanaas blends the Korean manhwa form with the Haida artistic and oral tradition in another stunning hand-painted volume.

Carpe Fin recounts the story of Carpe, the carpenter who constructs a giant mechanical whale in Red, and explains how he came to be stranded on a rock in the middle of the ocean.

In a small near-future community perched between the ocean and the northern temperate rainforest, a series of disasters is taking a heavy toll. It is early fall and a fuel spill has contaminated the marine foods the village was preparing to harvest. As food supplies dwindle, a small group decides to make a late season expedition to search for sea lions. Surprised by a ferocious storm, they abandon one man, Carpe, on an isolated rock at sea. After ten days they are finally able to return, but he has vanished. The story follows Carpe's encounters with the Lord of the Rock, who demands retribution for Carpe's role in the hunt, and Carpe's fate in the half-life between human and animal, life and death.

This feature require that you enable JavaScript in your browser.
END_OF_DOCUMENT_TOKEN_TO_BE_REPLACED

This feature require that you enable JavaScript in your browser.
END_OF_DOCUMENT_TOKEN_TO_BE_REPLACED

This feature require that you enable JavaScript in your browser.
END_OF_DOCUMENT_TOKEN_TO_BE_REPLACED