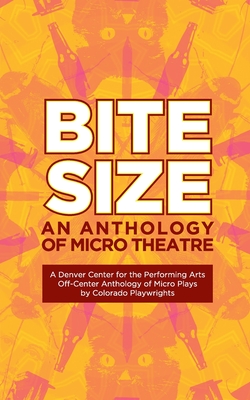 The rules were...it had to be written by a Colorado resident, no longer than 15 minutes, and related to books. This was the gauntlet that Denver Center for the Performing Arts's Off-Center threw down to Colorado playwrights.

Chosen from a pool of 200+ submissions, five short plays were at the center of a first-of-its-kind showcase in Denver: an evening of experiential micro theatre produced by DCPA Off-Center, and staged in tiny spaces at northwest Denver's beloved indie bookstore, BookBar. A compilation of original works featuring storylines ranging from quirky to momentous, Bite Size includes the five performed micro plays plus five more of the judge favorites:

This evocative anthology is both a must-read for theater buffs and a delightful memento for those who enjoyed the performances in person.

END_OF_DOCUMENT_TOKEN_TO_BE_REPLACED

This feature require that you enable JavaScript in your browser.
END_OF_DOCUMENT_TOKEN_TO_BE_REPLACED

This feature require that you enable JavaScript in your browser.
END_OF_DOCUMENT_TOKEN_TO_BE_REPLACED

This feature require that you enable JavaScript in your browser.
END_OF_DOCUMENT_TOKEN_TO_BE_REPLACED