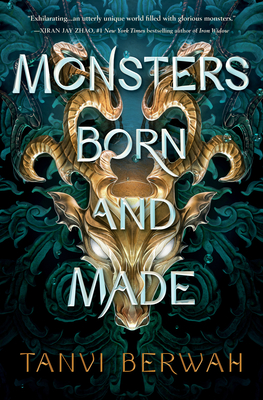 Koral is a sixteen-year-old hunter living on a small farm with her brother, mother, father, and her ill younger sister. On the farm Koral and her brother capture and raise the monstrous and dangerous Maristags to train them for the Glory Races. With a major debt hanging over her family’s head and lack of funds to help care for her sister, Koral decides to enter herself into the Glory Race which is something Hunters are normally not allowed to do! This book is gripping, fun, and exciting from page one and would be perfect for anyone who enjoyed The Hunger Games!

*A BuzzFeed Highly Anticipated YA Book of Summer 2022*

She grew up battling the monsters that live in the black seas, but it couldn't prepare her to face the cunning cruelty of the ruling elite.

Perfect for fans of The Hunger Games and These Violent Delights, this South Asian-inspired fantasy is a gripping debut about the power of the elite, the price of glory, and one girl's chance to change it all.

Sixteen-year-old Koral and her older brother Emrik risk their lives each day to capture the monstrous maristags that live in the black seas around their island. They have to, or else their family will starve.

In an oceanic world swarming with vicious beasts, the Landers—the ruling elite, have indentured Koral's family to provide the maristags for the Glory Race, a deadly chariot tournament reserved for the upper class. The winning contender receives gold and glory. The others—if they're lucky—survive.

When the last maristag of the year escapes and Koral has no new maristag to sell, her family's financial situation takes a turn for the worse and they can't afford medicine for her chronically ill little sister. Koral's only choice is to do what no one in the world has ever dared: cheat her way into the Glory Race.

But every step of the way is unpredictable as Koral races against competitors—including her ex-boyfriend—who have trained for this their whole lives and who have no intention of letting a low-caste girl steal their glory. As a rebellion rises and rogues attack Koral to try and force her to drop out, she must choose—her life or her sister's—before the whole island burns.

Perfect for fans of:

Praise for Monsters Born and Made:

"Monsters Born and Made takes well-beloved YA tropes and turns them on their heads, creating an action-packed rallying cry against oppression and a riveting tale of one girl's desperation to survive no matter the odds." —Roseanne A. Brown, New York Times bestselling author of A Song of Wraiths and Ruin

Tanvi Berwah grew up wanting to touch the stars and reach back in time. She graduated from the University of Delhi with a Bachelor's and Master's in Literature of English and lives in India. This is her debut novel.

"The South-Asian inspired setting is the true draw here... Koral is earnest and deeply well-intentioned... grim but compelling" — The Bulletin of the Center for Children's Books

"Berwah builds excitement with her well-crafted characters and storyline. Her world building is superb, and masterfully weaves in elements of the South Asian caste system. This book will leave readers eagerly awaiting a sequel" — Youth Services Book Review, STARRED review

"Berwah's worldbuilding is intense, depicting a cruel society in which the power-hungry elite are just as monstrous as the terrifying oceanic beasts...for dystopian fantasy fans seeking something fresh and savage" — Kirkus

"Both a brilliant competition story about a girl facing down impossible obstacles and a skillful critique of the society that created them, Monsters Born and Made will leave you breathless and desperate for more." — Vaishnavi Patel, New York Times bestselling author of Kaikeyi

""Readers familiar with YA-dystopias will be at home here, among monsters who are creatures—and the human monsters who drive systems of inequality and oppression."" — Paste

"I would recommend this to anyone looking for a cool, wild read!" — Kids' Book Buzz

"A gripping tale of struggle and sacrifice" — Lightspeed Magazine

"Monsters Born and Made takes well-beloved YA tropes and turns them on their heads, creating an action-packed rallying cry against oppression and a riveting tale of one girl's desperation to survive no matter the odds." — Roseanne A. Brown, New York Times bestselling author of A Song of Wraiths and Ruin

"In this heart wrenching tale of one girl's fight for survival, Berwah skillfully tears apart humanity's mask, revealing brutal truths about the monstrosities that lay within. An epic, page-turning debut by a brilliant new author!" — June CL Tan, author of Jade Fire Gold

This feature require that you enable JavaScript in your browser.
END_OF_DOCUMENT_TOKEN_TO_BE_REPLACED

This feature require that you enable JavaScript in your browser.
END_OF_DOCUMENT_TOKEN_TO_BE_REPLACED

This feature require that you enable JavaScript in your browser.
END_OF_DOCUMENT_TOKEN_TO_BE_REPLACED