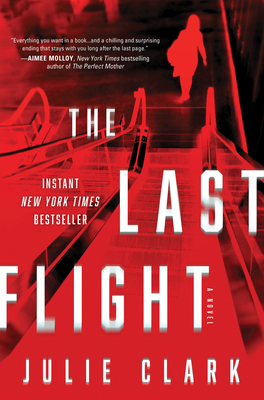 Claire – surviving in an abusive marriage in NYC; Eva – waitressing in an upscale restaurant in Berkeley and . . . operating a dangerous “side job.” A desperate attempt by two women to disappear from their current fearful lives. Can they pull it off? Two identities switched. A plane crash. One lives. Absolutely thrilling with all the twists, turns and connections you never see coming!

“When two women from different backgrounds, each with good reason for wanting to escape her current life, meet by chance at JFK, they decide to switch plane tickets and identities. When one of the flights crashes, the action really begins. This is a unique thriller that draws you into both lives and will have you turning the pages until the unexpected but perfect ending. I loved it!”
— Terry Gilman, Creating Conversations, Redondo Beach, CA

"The Last Flight is thoroughly absorbing--not only because of its tantalizing plot and deft pacing, but also because of its unexpected poignancy and its satisfying, if bittersweet, resolution. The characters get under your skin."--The New York Times Book Review

Claire Cook has a perfect life. Married to the scion of a political dynasty, with a Manhattan townhouse and a staff of ten, her surroundings are elegant, her days flawlessly choreographed, and her future auspicious. But behind closed doors, nothing is quite as it seems. That perfect husband has a temper that burns as bright as his promising political career, and he's not above using his staff to track Claire's every move, making sure she's living up to his impossible standards. But what he doesn't know is that Claire has worked for months on a plan to vanish.

A chance meeting in an airport bar brings her together with a woman whose circumstances seem equally dire. Together they make a last-minute decision to switch tickets--Claire taking Eva's flight to Oakland, and Eva traveling to Puerto Rico as Claire. They believe the swap will give each of them the head start they need to begin again somewhere far away. But when the flight to Puerto Rico goes down, Claire realizes it's no longer a head start but a new life. Cut off, out of options, with the news of her death about to explode in the media, Claire will assume Eva's identity, and along with it, the secrets Eva fought so hard to keep hidden.

For fans of Lisa Jewell and Liv Constantine, The Last Flight is the story of two women--both alone, both scared--and one agonizing decision that will change the trajectory of both of their lives.

END_OF_DOCUMENT_TOKEN_TO_BE_REPLACED

This feature require that you enable JavaScript in your browser.
END_OF_DOCUMENT_TOKEN_TO_BE_REPLACED

This feature require that you enable JavaScript in your browser.
END_OF_DOCUMENT_TOKEN_TO_BE_REPLACED

This feature require that you enable JavaScript in your browser.
END_OF_DOCUMENT_TOKEN_TO_BE_REPLACED