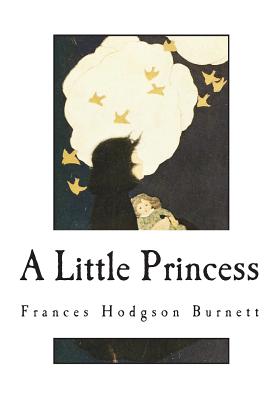 A Little Princess by Frances Hodgson Burnett. A Little Princess is a children's novel by Frances Hodgson Burnett, first published as a book in 1905. It is an expanded version of the short story "Sara Crewe: or, What Happened at Miss Minchin's", which was serialized in St. Nicholas Magazine from December 1887, and published in book form in 1888. Captain Crewe, a wealthy English widower, has been raising his only child, Sara, in India where he is stationed with the British Army. Because the climate in India is considered too harsh for children, British families living in the Raj traditionally send their children to boarding school back home in England. Captain Crewe enrolls his young daughter Sara at Miss Minchin's boarding school for girls in London. Crewe dotes on his daughter so much that he orders and pays the headmistress for special treatment and exceptional luxuries for Sara, such as a private room for her with a personal maid and a separate sitting room (see Parlour boarder), along with Sara's own private carriage and a pony. Miss Minchin openly fawns over Sara for her money, but secretly and jealously despises her for her wealth. Miss Minchin's younger sister Amelia, is kindhearted yet her will is weak.

END_OF_DOCUMENT_TOKEN_TO_BE_REPLACED

This feature require that you enable JavaScript in your browser.
END_OF_DOCUMENT_TOKEN_TO_BE_REPLACED

This feature require that you enable JavaScript in your browser.
END_OF_DOCUMENT_TOKEN_TO_BE_REPLACED

This feature require that you enable JavaScript in your browser.
END_OF_DOCUMENT_TOKEN_TO_BE_REPLACED