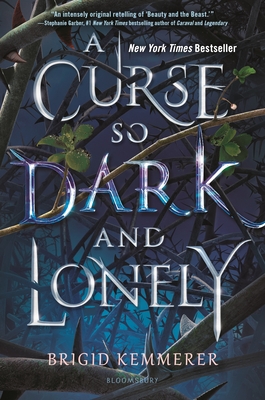 When Harper finds herself suddenly thrust into a fantastical world of frozen lands, she’s a bit shocked, considering she had been standing on the streets of Washington D.C. just a moment ago. Now trapped in Emberfall, with its castle frozen in time and less-than-charming prince, Harper must sort out a way to save her temporary home if she ever hopes to return to her world. Both compelling in its characters and romance, A Curse So Dark and Lonely sets itself apart with a heroine who is fierce in both attitude and courage, despite her cerebral palsy.

A New York Times bestseller!
"Has everything you'd want in a retelling of a classic fairy tale." - Jodi Picoult

In a lush, contemporary fantasy retelling of Beauty and the Beast, Brigid Kemmerer gives readers another compulsively readable romance perfect for fans of Marissa Meyer.

Fall in love, break the curse.

It once seemed so easy to Prince Rhen, the heir to Emberfall. Cursed by a powerful enchantress to repeat the autumn of his eighteenth year over and over, he knew he could be saved if a girl fell for him. But that was before he learned that at the end of each autumn, he would turn into a vicious beast hell-bent on destruction. That was before he destroyed his castle, his family, and every last shred of hope.

Nothing has ever been easy for Harper. With her father long gone, her mother dying, and her brother barely holding their family together while constantly underestimating her because of her cerebral palsy, she learned to be tough enough to survive. But when she tries to save someone else on the streets of Washington, DC, she’s instead somehow sucked into Rhen’s cursed world.

Break the curse, save the kingdom.

A prince? A monster? A curse? Harper doesn’t know where she is or what to believe. But as she spends time with Rhen in this enchanted land, she begins to understand what’s at stake. And as Rhen realizes Harper is not just another girl to charm, his hope comes flooding back. But powerful forces are standing against Emberfall . . . and it will take more than a broken curse to save Harper, Rhen, and his people from utter ruin.

Brigid Kemmerer is the author of Letters to the Lost and the Elementals series. She was born in Omaha, Nebraska, though her parents quickly moved her all over the United States, from the desert in Albuquerque, New Mexico, to the lakeside in Cleveland, Ohio, and several stops in between, eventually settling near Annapolis, Maryland.

“Has everything you'd want in a retelling of a classic fairy tale: a finely-drawn fantasy world, a heroine rarely seen in fiction, and a tortured hero with a secret. I have only one complaint: I wish the sequel were already available!” —Jodi Picoult, New York Times bestselling author of A SPARK OF LIGHT and SMALL GREAT THINGS

“Absolutely spellbinding. A Curse So Dark and Lonely expands on all the beloved themes of 'Beauty and the Beast' to create an intensely original retelling: one full of fierce new characters, wicked magic, and wondrous amounts of heart. Brigid Kemmerer doesn't just tell a story, she builds an entire world that you will never want to leave.” —Stephanie Garber, #1 New York Times bestselling author of CARAVAL and LEGENDARY

“I couldn't get this creative, suspenseful take on 'Beauty and the Beast' out of my head.” —Sara Holland, New York Times bestselling author of EVERLESS

“Heartwarming, thoughtful, and romantic: Brigid Kemmerer took me on a magical journey with this dark fairy tale about growing up, falling in love, and making impossible choices. I can't wait to see where these characters go next.” —Jodi Meadows, New York Times bestselling co-author of MY LADY JANE and MY PLAIN JANE

“Beautifully dark, filled with wild adventure and a modern-day heroine every reader will find a bit of themselves in.” —Alexandra Christo, author of TO KILL A KINGDOM

“Harper is the undisputed hero . . . Avoiding disability inspiration tropes, she is a fallible, well-rounded character who fights for the vulnerable and resists being labeled as such herself despite how others perceive her. A fast-paced, richly detailed feminist epic.” —Kirkus Reviews, starred review

“Fans of Cassandra Clare, Marissa Meyer, or Alex Flinn, as well as any reader looking to sink into a top-notch story with great characters, will want to read this book.” —VOYA, starred review

“A complex, creative, and compelling reimagining of Beauty and the Beast.” —School Library Connection, highly recommended

“Kemmerer knows how to blend a compelling story with a swoony romance, and the love triangle that inevitably develops . . . is organic and unforced because of strong characterization.” —BCCB

“A unique world filled with fantasy and menace . . . will leave readers anxious to see what happens next.” —School Library Journal

“Kemmerer merges modern sensibilities with an epic love story in this Beauty and the Beast retelling.” —Shelf Awareness

“Readers looking for a different sort of coming-of-age story or teen protagonists grappling with complex situations will fall in love with this romance-tinged novel.” —Starred review, Booklist on MORE THAN WE CAN TELL

“A must-have for any YA collection. Give to teens who enjoyed A Boy Called It by Dave Pelzer or The Perks of Being a Wallflower by Stephen Chbosky.” —Starred review, School Library Journal on MORE THAN WE CAN TELL

“This book is going to fly off the shelves to all teens, but it will hold special interest for those looking for a tear-jerking romance and serious readers of realistic fiction.” —VOYA on LETTERS TO THE LOST

“A great concept, delivered in a compulsively readable package . . . romance readers will stay up late to finish this very satisfying and heartfelt read.” —Booklist on LETTERS TO THE LOST

“Explores the ideas of carving identity out of pain and the way perception colors expectations.” —BCCB on LETTERS TO THE LOST

“Readers will find themselves rooting for the real Declan to win Juliet's heart the same way his online persona did. Consider this tale of modern star-crossed love as a first purchase for YA collections.” —School Library Journal on LETTERS TO THE LOST

This feature require that you enable JavaScript in your browser.
END_OF_DOCUMENT_TOKEN_TO_BE_REPLACED

This feature require that you enable JavaScript in your browser.
END_OF_DOCUMENT_TOKEN_TO_BE_REPLACED

This feature require that you enable JavaScript in your browser.
END_OF_DOCUMENT_TOKEN_TO_BE_REPLACED