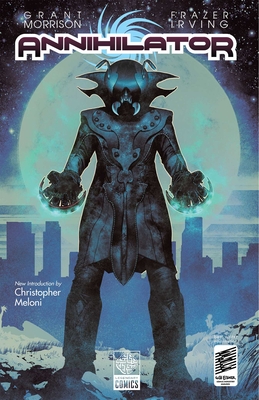 An amazing, genre-breaking story from Grant Morrison, one of the most original and inventive writers in comics today.

For the first time in softcover, Legendary Comics proudly presents Annihilator, an original graphic novel odyssey from the subversive mind of Grant Morrison. With an alternate cover, this 6-issue series is a reality-bending sci-fi adventure like no other, brought to life with stunning artwork from Frazer Irving (Batman and Robin, Judge Dredd, Necronauts).
Washed-up Hollywood screenwriter Ray Spass is caught in a downward spiral of broken relationships, wild parties and self-destruction. Out of luck and out of chances, he's one failed script away from fading into obscurity. Little does he know he's about to write the story of his life.

As his imagination runs rampant, Ray must join forces with his own fictional character Max Nomax on a reality-bending race to stop the entire universe from imploding... without blowing his own mind in the process.

• This is the compilation of the 6 issue series

• Includes bonus materials on the making of the comic

"Morrison is one of the most adventurous and commercially successful comic-book writers of the past 25 years, retrieving superheroic and science-fictional dispatches from the fringes of consciousness, splattering his chaotic visions onto the page." -- Rolling Stone

"I think [Annihilator is] the best stuff I've done yet." -- Frazer Irving

Grant Morrison is highly regarded as one of the most original and inventive writers to work in the comic book industry. He is recognized as being one of the best-selling writers in the medium in the last 20 years.

Frazer Irving is a British comic book artist known for the 2000 AD series Necronauts. Irving studied art at the University of Portsmouth, England, after which he took various temporary jobs in London. Since breaking into the American market he has worked on a number of superhero titles. Residence: Scotland

END_OF_DOCUMENT_TOKEN_TO_BE_REPLACED

This feature require that you enable JavaScript in your browser.
END_OF_DOCUMENT_TOKEN_TO_BE_REPLACED

This feature require that you enable JavaScript in your browser.
END_OF_DOCUMENT_TOKEN_TO_BE_REPLACED

This feature require that you enable JavaScript in your browser.
END_OF_DOCUMENT_TOKEN_TO_BE_REPLACED