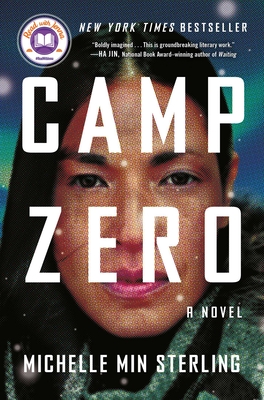 A book that becomes more and more relevant every passing day. In a frighteningly possible future where climate change has destroyed life as we know it, the powerful elite live in luxury while the rest of the population faces exploitation and displacement. Delve into this brutal world through three equally captivating points of view and uncover the secrets of Camp Zero, a mysterious building project in icy northern Canada that sits at the heart of this story. Don't let this book's slow build fool you - the storlines fall together seamlessly and culminate in an ending that will leave you shaken. Although a quick read, the characters and message of this story will stick with you long after the last page.

In a near-future northern settlement, a handful of climate change survivors find their fates intertwined in this mesmerizing and transportive novel in the vein of Station Eleven and The Power.

In the far north of Canada sits Camp Zero, an American building project hiding many secrets.

Desperate to help her climate-displaced Korean immigrant mother, Rose agrees to travel to Camp Zero and spy on its architect in exchange for housing. She arrives at the same time as another newcomer, a college professor named Grant who is determined to flee his wealthy family’s dark legacy. Gradually, they realize that there is more to the architect than previously thought, and a disturbing mystery lurks beneath the surface of the camp. At the same time, rumors abound of an elite group of women soldiers living and working at a nearby Cold War-era climate research station. What are they doing there? And who is leading them?

An electrifying page-turner where nothing is as it seems, Camp Zero cleverly explores how the intersection of gender, class, and migration will impact who and what will survive in a warming world.

Michelle Sterling was born in British Columbia, Canada, and now lives in Cambridge, Massachusetts, where she teaches literature and writing at Berklee College of Music. She has an MFA from Boston University and has held writing fellowships at Akademie Schloss Solitude, Vermont Studio Center, Virginia Center for the Creative Arts, and the Banff Centre for the Arts and Creativity. Her writing has appeared in publications such as The Baffler, VICE, and Joyland. Camp Zero is her first novel.

“A smart setup . . . The book has a soul that generates momentum. It’s committed to the bonds of family, the ones we are born into and the ones we choose, as a way forward in an increasingly chaotic world. A love letter to what communities of women can accomplish when they work in concert.” —Kirkus Reviews

“[A] stunning debut . . . Sterling’s future is close enough to the present to be entirely recognizable, underlining this cleverly constructed climate fiction mystery with palpable terror: this world feels like one many readers could see within their lifetimes. This should earn a place on shelves alongside Station Eleven and Annihilation.” —Publishers Weekly, starred review

“Camp Zero is a sui generis novel, boldly imagined, intricately designed, and convincingly detailed. Though set in the near future, it resonates with a palpable sense of reality and with the deep insights into some dimensions of the human condition, such as migrations, the burden of the past, environmental destruction, gender inequality, self-recreation. Page by page, the prose shines with subtle verbal artistry. This is groundbreaking literary work.” —HA JIN, National Book Award-winning author of Waiting

“In an equally tantalizing and terrifying tour de force, Michelle Min Sterling boldly remixes the realities of our present world, the danger we are in, and the fates we have settled for through a mesmerizing story of loyalty, deception, and ultimately love. Camp Zero’s dark twists and bright turns left me breathless, hopeful, furious, and emboldened until the very end.” —NANCY JOOYOUN KIM, New York Times bestselling author of The Last Story of Mina Lee

“Michelle Sterling reports back from the future in this fiercely imagined conjuring of the devastating impacts of our warming world. Alternately terrifying and enthralling, this is a propulsive read with touches of Blade Runner, even Fury Road’s survival-is-everything pace and intensity where female strength is on delightful display. But even on its darkest pages, Camp Zero is infused with the conviction that the way out—if there is one—lies in old ideas like love, bravery, and shared community.” —ERICA FERENCIK, author of Girl In Ice and The River at Night

“An exhilarating tale of survival set in a world of environmental decline, Camp Zero explores a future brimming with equal parts rage and resilience. Sterling’s masterful debut transports readers to a frozen landscape where the intersections of class, gender, and climate change come to a head—and where women must rely on their own cunning to survive. This powerful, prescient story will haunt the reader’s imagination long after the final page.” —LAURA MAYLENE WALTER, author of Body of Stars

“The future Michelle Sterling imagines in Camp Zero is recognizably our own, if we do nothing to halt climate change: one in which the powerful find new and devastating ways to exploit both the earth and its people. But all is not as it seems. In a series of ingenious twists and increasingly tight connections, Sterling imagines how, in the chaos that ensues after the ice caps melt, our most marginalized brethren may gain a foothold to power. This is one of the best books I’ve read in a long time: it’s mesmerizing, terrifying, and ultimately, hopeful.” —CAROLINE WOODS, author of The Lunar Housewife

“Michelle Sterling has written a big, gutsy, and clear-eyed novel of the near future that neither lurches with dread nor swoons with false hope: it's a cold, hungry adventure story about the power of choice and the strength of solidarity. You won't be able to put it down.” —SEAN MICHAELS, Giller Prize-winning author of Us Conductors

This feature require that you enable JavaScript in your browser.
END_OF_DOCUMENT_TOKEN_TO_BE_REPLACED

This feature require that you enable JavaScript in your browser.
END_OF_DOCUMENT_TOKEN_TO_BE_REPLACED

This feature require that you enable JavaScript in your browser.
END_OF_DOCUMENT_TOKEN_TO_BE_REPLACED