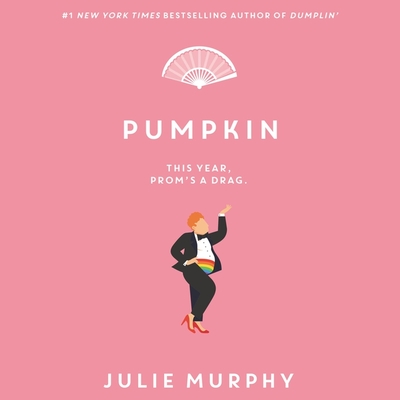 “A wonderful return to Clover City, Pumpkin has all the elements we loved from Dumplin' and Puddin' with lots of cameos of favorite characters. Waylon is at that familiar crossroads of nearing high school graduation and having to plan his next move without really knowing what he wants to do or how to get there. Heartwarming and encouraging!”
— Rebecca Waesch, Joseph-Beth Booksellers, Cincinnati, OH

Waylon Russell Brewer is a fat, openly gay boy stuck in the small West Texas town of Clover City. His plan is to bide his time until he can graduate, move to Austin with his twin sister, Clementine, and finally go Full Waylon so that he can live his Julie-the-hills-are-alive-with-the-sound-of-music-Andrews truth.

So when Clementine deviates from their master plan right after Waylon gets dumped, he throws caution to the wind and creates an audition tape for his favorite TV drag show, Fiercest of Them All. What he doesn't count on is the tape getting accidentally shared with the entire school. . . . As a result, Waylon is nominated for prom queen as a joke. Clem's girlfriend, Hannah Perez, also receives a joke nomination for prom king.

Waylon and Hannah decide there's only one thing to do: run--and leave high school with a bang. A very glittery bang. Along the way, Waylon discovers that there is a lot more to running for prom court than campaign posters and plastic crowns, especially when he has to spend so much time with the very cute and infuriating prom king nominee Tucker Watson.

Waylon will need to learn that the best plan for tomorrow is living for today . . . especially with the help of some fellow queens. . . .

END_OF_DOCUMENT_TOKEN_TO_BE_REPLACED

This feature require that you enable JavaScript in your browser.
END_OF_DOCUMENT_TOKEN_TO_BE_REPLACED

This feature require that you enable JavaScript in your browser.
END_OF_DOCUMENT_TOKEN_TO_BE_REPLACED

This feature require that you enable JavaScript in your browser.
END_OF_DOCUMENT_TOKEN_TO_BE_REPLACED