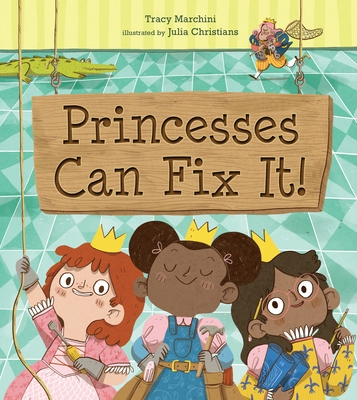 The castle is crawling with wayward alligators, and the clueless king doesn’t know how to fix it. Lila, Margaret, and Harriet have lots of ideas, but their father won’t listen! According to him, the Princesses should be focusing on proper pursuits like drawing, jewelry, and music. When the three girls start falling asleep during the day, the King sends the Prince to investigate …

What he discovers is that the three princesses are gathering at night to use their knowledge of the six simple machines to invent an ingenious alligator removal contraption in their secret workshop.

This STEAM-focused take on the classic fairy tale The Twelve Dancing Princesses includes fun illustrations bursting with hilarious detail (and alligators), zany characters, and three inspiring princesses who know that they have what takes to save the day.

Tracy Marchini has worked in many areas of the children’s book industry including as a freelance editor and a children’s book reviewer, and currently as a literary agent and author. She received her MFA in writing for children from Simmons College, and is the author of Chicken Wants a Nap (which received a starred review from Kirkus).

Julia Christians studied communications design at the University of Art in Brunswick, focusing on illustration, and works as a full-time illustrator. She lives with her husband, kids, and a pack of dogs in the small town in the Harz Mountains, Germany where she grew up.

END_OF_DOCUMENT_TOKEN_TO_BE_REPLACED

This feature require that you enable JavaScript in your browser.
END_OF_DOCUMENT_TOKEN_TO_BE_REPLACED

This feature require that you enable JavaScript in your browser.
END_OF_DOCUMENT_TOKEN_TO_BE_REPLACED

This feature require that you enable JavaScript in your browser.
END_OF_DOCUMENT_TOKEN_TO_BE_REPLACED