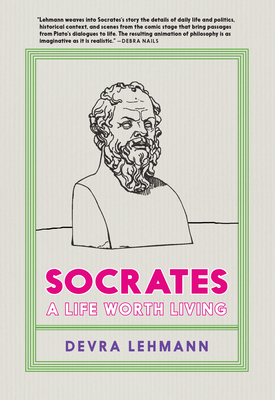 A lively and accessible introduction to the quintessential philosopher, and the civilized world’s first enemy of the state.


Socrates: A Life Worth Living traces the life and ideas of one of Western Civilization’s founding philosophers, whose influence is still felt more than two thousand years later. Socrates is famous for how he died, executed by the Athenian government for corrupting the youth of Athens, but his most important contribution was to challenge the people around him to test their ideas and beliefs in conversation with each other, in the belief that in this way we could become a society that knows the difference between truth and falsehood, and find what makes a life worthwhile. He did not claim to have definitive answers, but he knew that knowledge was the key to finding them, and he invited everyone he met to join him in his quest.

The Socratic Method is the first, and still the best, method for distinguishing truth from falsehood. In Socrates: A Life Worth Living, award-winning author Devra Lehmann gives us the first biography for young readers of the thinker who has seen no equal.

DEVRA LEHMANN is the author of Spinoza: The Outcast Thinker, which won the 2014 National Jewish Book Award for Children’s and Young Adult Literature. In her 35 years in the classroom, she has taught preschoolers to sound out monosyllables, high schoolers to read Shakespeare, and adults to parse Talmudic passages. She is now at work on a young adult biography of Augustine of Hippo.

"What a welcome book! Socrates—relentless in the pursuit of truth, champion of the Socratic method, fearless prisoner of conscience—went willingly to his death upon the verdict of an Athenian jury. Why? He lived almost 2,500 years ago, and yet the questions he raised and the controversies he generated are disputed as heatedly now as they were then. Lehmann weaves into Socrates’s story the details of daily life and politics, historical context, and scenes from the comic stage that bring passages from Plato’s dialogues to life. The resulting animation of philosophy is as imaginative as it is realistic."
—Debra Nails, professor emerita, Michigan State University, and author of The People of Plato

"A thorough study of the brilliant, timeless, entertainingly abrasive thinker. . . .
This account is based on judicious use of source material and massive research and further livened throughout by frequent photos or diagrams of major Athenian buildings, sexually suggestive images on artifacts, and even an illustration of a hemlock plant. Women do get rare but occasional mentions.
A vivid, perceptive portrait aimed at spurring readers to take up the quest. (map, notes, note on sources, bibliography, glossary, index)."
—Kirkus Reviews, starred review

This feature require that you enable JavaScript in your browser.
END_OF_DOCUMENT_TOKEN_TO_BE_REPLACED

This feature require that you enable JavaScript in your browser.
END_OF_DOCUMENT_TOKEN_TO_BE_REPLACED

This feature require that you enable JavaScript in your browser.
END_OF_DOCUMENT_TOKEN_TO_BE_REPLACED