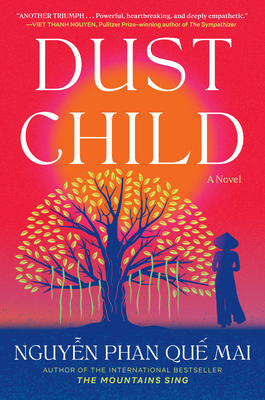 Phong, growing up Amerasian in a society that treats you like a “dust child” - homeless, abandoned, “a child of the enemy” - attempts to get a visa to come to the United States. Dan, a helicopter pilot during the Vietnam War, returns almost fifty-years later to look for Kim and their child. Does one try to make amends or leave life the way it is without disrupting someone else’s? These two scenarios, as well as the psychological trauma of war for both soldiers and civilians, play a major role in Nguyen Phan Que Mai’s newest most realistic novel of living through a war and its painful aftereffects.

From the internationally bestselling author of The Mountains Sing, a suspenseful and moving saga about family secrets, hidden trauma, and the overriding power of forgiveness, set during the war and in present-day Việt Nam.

In 1969, sisters Trang and Quỳnh, desperate to help their parents pay off debts, leave their rural village and become “bar girls” in Sài Gòn, drinking, flirting (and more) with American GIs in return for money. As the war moves closer to the city, the once-innocent Trang gets swept up in an irresistible romance with a young and charming American helicopter pilot. Decades later, an American veteran, Dan, returns to Việt Nam with his wife, Linda, hoping to find a way to heal from his PTSD and, unbeknownst to her, reckon with secrets from his past.

At the same time, Phong—the son of a Black American soldier and a Vietnamese woman—embarks on a search to find both his parents and a way out of Việt Nam. Abandoned in front of an orphanage, Phong grew up being called “the dust of life,” “Black American imperialist,” and “child of the enemy,” and he dreams of a better life for himself and his family in the U.S.

Past and present converge as these characters come together to confront decisions made during a time of war—decisions that force them to look deep within and find common ground across race, generation, culture, and language. Suspenseful, poetic, and perfect for readers of Min Jin Lee’s Pachinko or Yaa Gyasi’s Homegoing, Dust Child tells an unforgettable and immersive story of how those who inherited tragedy can redefine their destinies through love, hard-earned wisdom, compassion, courage, and joy.

Born and raised in Việt Nam, Nguyễn Phan Quế Mai is the author of The Mountains Sing, runner-up for the 2021 Dayton Literary Peace Prize, winner of the 2020 BookBrowse Best Debut Award, the 2021 International Book Awards, the 2021 PEN Oakland/Josephine Miles Literary Award, and the 2020 Lannan Literary Award Fellowship for Fiction. She has published twelve books of poetry, fiction, and nonfiction and has received some of the top literary prizes in Việt Nam. Her writing has been translated into twenty languages and has appeared in major publications, including the New York Times. She has a PhD in creative writing from Lancaster University. She is an advocate for the rights of disadvantaged groups in Việt Nam and has founded several scholarship programs, and she was named by Forbes Vietnam as one of twenty inspiring women of 2021. For more information, visit: www.nguyenphanquemai.com

"Nguyễn Phan Quế Mai will win many more readers with her powerful and deeply empathetic second novel. From the horrors of war and its enduring afterlife for men and women, lovers and children, soldiers and civilians, she weaves a heartbreaking tale of lost ideals, human devotion, and hard-won redemption. Dust Child establishes Nguyễn Phan Quế Mai as one of our finest observers of the devastating consequences of war, and proves, once more, her ability to captivate readers and lure them into Viet Nam’s rich and poignant history."—Viet Thanh Nguyen, Pulitzer Prize winning author of The Sympathizer and The Committed

"Nguyễn Phan Quế Mai shows us the capacity we hold to confront our pasts, for the purpose of life is not to remain intact, but to break open, to let loss be a guide, to face the echoes of longing. In Dust Child, rupture leads to emotional richness and pain creates the pathways worth walking. I truly cannot wait for the rest of the world to celebrate this book."—Chanel Miller, New York Times bestselling author of Know My Name

"Once again, Nguyễn Phan Quế Mai has written a beautiful novel that shines a light on the history of Vietnam. With a poet's grace, she writes of the legacy of war across time and place and the stories that bind us. Dust Child is simply stunning."—Eric Nguyen, author of Things We Lost To The Water

"Nguyễn Phan Quế Mai is one of the most unique storytellers of our time. She creates plots which are Dickensian in their breadth and mastery, while bravely probing the complex emotional challenges of living in a modern world full of disruption and displacement. In Dust Child, Quế Mai displays the same tenderness and compassion for her characters, hard-earned understanding of human trauma, and poetically evocative language that made her debut novel The Mountains Sing an international bestseller beloved around the world."
—Natalie Jenner, internationally bestselling author of The Jane Austen Society

"With a poet's gift for language and a psychologist's eye for the tender, error-prone hearts of mankind, Nguyễn Phan Quế Mai weaves a web of impossible choices, inescapable circumstance, and searing loss, set to the backdrop of a war that changed everything . . . A heartbreaking, beautifully told, utterly unique story of love, loss, and longing that speaks to the very heart of the human experience."—Kristin Harmel, New York Times bestselling author of The Forest of Vanishing Stars

"Scenes of past and present Việt Nam come alive in these pages, drawing you into the lives of a handful of characters who become like your family, and in whose stories lies the heartbreaking story of Việt Nam's complicated relationship with America. With her generous heart and unmatched ability to write across languages and cultures, Quế Mai is the perfect guide for the wounded who search for home and healing."—Thi Bui, award-winning author of The Best We Could Do

"Well-researched, realistic, and compassionately written, Dust Child brings to life the heartbreaking experiences of young American men and young Vietnamese women who were pulled into the vortex of the Việt Nam War and the tragedy inherited by their Amerasian children. Nguyễn Phan Quế Mai's powerful novel enables us to travel deep into Việt Nam's past and present days so that we can bear witness to the courage of her Amerasian, Vietnamese, and American characters. This eye-opening and fascinating novel is a must-read!"—Le Ly Hayslip, bestselling author of When Heaven and Earth Changed Places and The Child of War, Woman of Peace

“The sons and daughters of American soldiers and their Vietnamese girlfriends who exhibited African American and European features were shunned by Vietnam’s monoethnic society during and after the war. Nguyễn Phan Quế Mai writes of some of these "dust children" with complexity and heart. This is a powerful and moving story, brilliantly told." —Robert Mason, New York Times bestselling author of Chickenhawk

“In her riveting successor to The Mountains Sing, Nguyễn Phan Quế Mai has masterfully captured the toll of war and its aftermath on a Black Amerasian, an outcast in the country of his birth, on an American vet, haunted and seeking redemption, and on two Vietnamese sisters, forced by economic hardship into circumstances they could not have foreseen. Nguyễn creates, in her luminous prose, a gripping and nuanced narrative of men and women caught in the web of war and its aftermath.” —Steven DeBonis, author of Children of the Enemy: Oral Histories of Vietnamese Amerasians and Their Mothers

"With great compassion, with a firm conviction in the redeeming power of love and forgiveness, and with the consummate skill of a great story-teller, Nguyễn Phan Quế Mai weaves us into the lives, past and present, of those called “the dust of life”—the ostracized, mixed-race children of American soldiers; their mothers, compelled by war into prostitution, and their fathers, the G.I.’s who abandoned them and yet remained haunted by them."

—Professor Wayne Karlin, author of Wandering Souls: Journeys with the Deadand the Living in Viet Nam

“Rewarding… with a cinematic clarity.”—Publishers Weekly

This feature require that you enable JavaScript in your browser.
END_OF_DOCUMENT_TOKEN_TO_BE_REPLACED

This feature require that you enable JavaScript in your browser.
END_OF_DOCUMENT_TOKEN_TO_BE_REPLACED

This feature require that you enable JavaScript in your browser.
END_OF_DOCUMENT_TOKEN_TO_BE_REPLACED