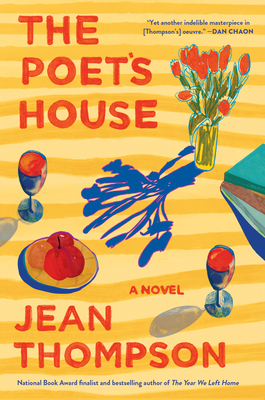 There has to be a sequel to The Poet’s House! I want to know what the future holds for these colorful characters who all become connected through one writer, Viridian, an elderly poet. Starting an unfamiliar journey, Carla, her landscaper, tries to fit in with Viridian’s entourage of poets, publishers and friends. Even the author turns poet as she cleverly interjects fitting poems throughout her prose. The Poet’s House will leave you contemplating the growth of your own legacy and remind you of the many twists and turns one’s life will take.

"A page-turning narrative with laugh-out-loud scenes, and ultimately a hopeful, affirming book about how words can stir the mystery in us.” —Julia Alvarez, author of Afterlife

A warm and witty story of a young woman who gets swept up in the rivalries and love affairs of a dramatic group of writers.

Carla is stuck. In her twenties and working for a landscaper, she’s been told she’s on the wrong path by everyone—from her mom, who wants her to work at the hospital, to her boyfriend, who is dropping not-so-subtle hints that she should be doing something that matters.

­Then she is hired for a job at the home of Viridian, a lauded and lovely aging poet who introduces Carla to an eccentric circle of writers. At first she is perplexed by their predilection for reciting lines in conversation, the stories of their many liaisons, their endless wine-soaked nights. Soon, though, she becomes enamored with this entire world: with Viridian, whose reputation has been defined by her infamous affair with a male poet, Mathias; with Viridian’s circle; and especially with the power of words, the “ache and hunger that can both be awakened and soothed by a poem,” a hunger that Carla feels sharply. When a fight emerges over a vital cache of poems that Mathias wrote about Viridian, Carla gets drawn in. But how much will she sacrifice for a group that may or may not see her as one of their own?

A delightfully funny look at the art world—sometimes petty, sometimes transactional, sometimes transformative— ­The Poet’s House is also a refreshingly candid story of finding one’s way, with words as our lantern in the dark.

Jean Thompson is the author of fourteen books of fiction, including the National Book Award finalist Who Do You Love, the NYT bestseller The Year We Left Home, and the NYT Notable Book Wide Blue Yonder. Her work has been published in the New Yorker, as well as dozens of other magazines, and anthologized in The Best American Short Stories and the Pushcart Prize. She has been the recipient of Guggenheim and National Endowment for the Arts fellowships, among other accolades, and has taught creative writing at the University of Illinois Urbana-Champaign, Reed College, Northwestern University, and many other colleges and universities.

“Wry, canny, and delectable . . . As a tribute to the soul-saving value of art, a cri de coeur for women striving to make authentic lives, and a pipeline of guidance from the elders to the emerging, The Poet’s House offers many rooms, infinitely worth the tour.”
—The San Francisco Chronicle

“There’s no doubting and no escaping the joyful, hopeful spirit that inhabits The Poet’s House— the spirit of poetry that by the end of this charming novel Carla so clearly embodies — and the irrepressible Jean Thompson so smartly imparts.”
—Ellen Akins, The Washington Post

“The brilliantly rendered mise-en-scène of quarrelsome, ego-ridden yet touchingly fragile poets and the literary entrepreneurs who circle around them makes a vivid backdrop for this classic coming-of-age tale. More thoughtful, elegantly written fiction in the classic realist tradition by the gifted Thompson.”
—Kirkus Reviews, starred review

"Ever insightful, imaginative, compassionate, and funny, Thompson is a virtuoso of thorny interactions between wholly realized characters rife with contradictions. And she is so in her element, bringing this richly dimensional book-anchored mise-en-scène to life with lacerating wit and rueful tenderness while adeptly interleaving a poet's long, covert battle against sexism and regret with the verdant tale of a young woman taking root in an unexpectedly sustaining realm."
—Booklist, starred review

“A coming-of-age novel, a novel of manners (Jane Austen, make some room on that big bench, dear), a page-turning narrative with laugh-out-loud scenes, and ultimately a hopeful, affirming book about how words can stir the mystery in us, help us find ourselves, and maybe even make us, however reluctantly, bigger versions of ourselves. The Poet’s House is a book I’ll be recommending to my friends who are readers and even to those who are not, but who will, to be sure, fall in love with Carla, with her discoveries, and with that master storyteller, Jean Thompson.”
—Julia Alvarez, author of Afterlife

"Jean Thompson is a national treasure.  She's the kind of  writer who can make you laugh and cry at the same time, a consummate prose stylist whose work is full of insight and wisdom and a deadly keen eye for the foibles and self-deceptions of her characters. The Poet's House is yet another indelible masterpiece in her oeuvre."
—Dan Chaon, author of Sleepwalk

“Charming . . . Part of the fun of The Poet's House is in its small details and memorable descriptions, but the biggest pleasures are Carla's evolution, the many well-drawn characters and subtle pokes at the competitiveness of the literary world.”
—BookPage

"Thompson’s talents for immersive storytelling and sharp characters are on brilliant display, particularly in her portrayal of Carla’s longing for something greater, and of Viridian’s conflicted feelings about Mathias’s work. The author’s fans will savor this."
—Publishers Weekly

“Jean Thompson makes hanging out with poets look like even more of a good time than one suspects, in real life, it might be. The Poet's House is terrific company: funny, poignant, and full of realistically quirky and original characters. A thoroughly enjoyable read.”
—Julie Schumacher, author of The Shakespeare Requirement

Praise for Who Do You Love:

“A quietly devastating book...few fiction writers working today have more successfully rendered the sensation of solid ground suddenly melting away, pinpointing that instant when the familiar present is swallowed up by an always encroaching past or voided future."
— Katherine Dieckmann, New York Times Book Review

“With spare eloquence, Thompson surveys the lives of emotionally dislocated people craving connection but infuses even the saddest situation with humor and a wry glimmer of hope. The fifteen stories in this collection ring with an unpretentious integrity and a knowledge of human complexities."
— Publishers Weekly, Best Books of 1999

"The best pieces in this collection are as good as it gets in contemporary fiction. Jean Thompson has long been a writer much admired by other writers; perhaps Who Do You Love will bring her the wider recognition she deserves.”
—Newsday

"Wide Blue Yonder reaffirms Thompson's stature as one of our most lucid and insightful writers.”
—San Francisco Chronicle

“Detonates a whole fireworks of happy endings—flares of hope and success so exuberant that the book almost seems to require a warning label.”
—New York Times Book Review

“If there are 'Jean Thompson characters,' they're us, and never have we been so articulate and worthy of compassion. These stories confirm that no one is beneath her interest, or beyond her sure and seemingly limitless reach."
— David Sedaris

"Like Raymond Carver, Jean Thompson is fascinated by the sudden and unlikely communion of people. Her characters vary, but she never condescends to them, no matter how hungry their hearts are, no matter how many screws they have loose . . . Her fiction [is] a gold mine.”
—Newsweek

“Thompson is a writer of extraordinary intelligence and sensitivity.”
—O, The Oprah Magazine

Praise for Do Not Deny Me:

Thompson...delivers a deeply affecting collection that elevates the quotidian to the sublime . . . explore[s] a bewildering array of experience . . . Thompson immerses readers in details and emotions so consuming and convincing that the inane vagaries of modern life can take on near mythic importance. This collection shows the confidence and power of a writer in her prime."
—Publishers Weekly, starred review

“[Thompson's] particular grace . . . may be that her language and approach at first seem so straightforward that it's only partway through reading a story that, like one of her characters, we experience the surprise of a new world unfolding from the ordinary . . . twilit, elegiac . . . downright funny, too . . . Reviewing such a remarkable writer, one's own words can seem too ordinary, but Thompson's talent is such that it can overcome even those limitations."
—Booklist, starred review

Praise for The Year We Left Home:

"Wise and absorbing, this is one not to miss.”
—People

"The Year We Left Home plumbs the American heart with rigor and intensity, seamlessly connecting one family’s fortunes to those of the larger national community.”
—O: The Oprah Magazine

Praise for The Humanity Project:
“[A] bracing narrative stance and a tart political viewpoint . . . [Thompson] is eerily good at inhabiting a wide range of perspectives and has a fine ear for the way young people speak to one another . . . a novel that doesn’t pretend to have any answers, comfortable or otherwise, but that vividly, insistently poses questions we should be asking.”
—The New York Times

“Thompson achieves exceptional clarity and force in this instantly addictive, tectonically shifting novel. As always, her affection and compassion for her characters draw you in close, as does her imaginative crafting of precarious situations and moments of sheer astonishment . . . Thompson infuses her characters’ bizarre, terrifying, and instructive misadventures with hilarity and profundity as she considers the wild versus the civilized, the “survival of the richest,” how and why we help and fail each other, and what it might mean to “build an authentic spiritual self.” Thompson is at her tender and scathing best in this tale of yearning, paradox, and hope.”
—Booklist, starred review

“[A] penetrating vision of a lower-middle-class family sinking fast . . . Thompson has a knack for rendering characters who are emotionally fluid but of a piece [and] caps the story with a smart twist ending that undoes many of the certainties the reader arrived at in the preceding pages. A rare case of a novel getting it both ways: A formal, tightly constructed narrative that accommodates the mess of everyday lives.”
—Kirkus, starred review

“[Humanity is] something that Thompson infuses into every sentence, striking true, clear notes . . . and telling [characters'] stories in a way that doesn't offer resolutions so much as a messy, imperfect kind of grace. And what's more human than that?”
—Entertainment Weekly

Praise for A Cloud in the Shape of a Girl:
"There’s not a false note in this powerful, beautifully crafted exploration of the trade-offs in women’s lives."
—People

"Jean Thompson is a brilliant novelist from the classic school of storytelling. A Cloud in the Shape of a Girl is a story that illustrates our present moment through a keen and unflinching look at our past. Thompson’s work centers on the Midwest, what some call ‘fly over’ country, but in her hands, we come to see that it is the center."
—Tayari Jones, author of An American Marriage

"In this beautiful and unflinching novel, Thompson excavates one of life’s essential truths: if we aren’t doomed to repeat the past we are certainly called to reckon with it, to acknowledge the shape of our personal history and decide what to carry forward, what to bury. Gorgeously written and perfectly composed, this book is a powerful look at the unbidden forces that shape our lives and the unexpected places where love erupts and flourishes."
—Cynthia D'Aprix Sweeney, author of The Nest

This feature require that you enable JavaScript in your browser.
END_OF_DOCUMENT_TOKEN_TO_BE_REPLACED

This feature require that you enable JavaScript in your browser.
END_OF_DOCUMENT_TOKEN_TO_BE_REPLACED

This feature require that you enable JavaScript in your browser.
END_OF_DOCUMENT_TOKEN_TO_BE_REPLACED