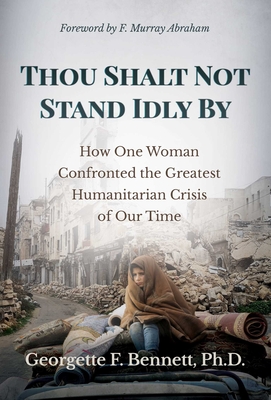 The inspiring story of how one woman forged a series of unprecedented partnerships across national, tribal, and religious boundaries to impact an overwhelming crisis against near impossible odds.

Set against the backdrop of the Syrian civil war and the massive humanitarian crisis it produced, Georgette Bennett tells the largely untold story of how sworn enemies—Syrians and Israelis, Jews and Muslims—came to trust each other with their lives in order to alleviate terrible suffering. The dramatic tale of their unlikely collaboration illustrates what a few determined individuals can do in the face of inertia, inefficiency, and widespread indifference. It also shows how the novel concept of humanitarian diplomacy offers a beacon of hope for all the hate-based clashes occurring around the world today.

Founder of the Tanenbaum Center for Interreligious Understanding and the Multifaith Alliance for Syrian Refugees, Dr. Georgette Bennett, a sociologist, has spent nearly thirty years advancing interreligious relations. She works with top interfaith leaders to delegitimize the misuse of religion to justify violence and served in the U.S. State Department Religion and Foreign Policy’s working group on conflict mitigation for countering religion-based violence. She was a network correspondent for NBC News and host of Walter Cronkite’s PBS current affairs series, Why in the World?, among other outlets. She has been awarded the prestigious AARP Purpose Prize. Earlier, she received awards for her work as a criminologist. She is married, with one son and three stepchildren.

"Thou Shalt Not Stand Idly By is the story of one of the most important and improbable humanitarian initiatives of our time. In turn inspiring, heartbreaking, and exhilarating, this book is above all a testament to how a few determined people can change one tortured corner of the world. Anyone concerned with the future of the Middle East—with the future of humanity—should read this powerful book."
— Yossi Klein Halevi, Senior Fellow, Shalom Hartman Institute, Author, "Letters to My Palestinian Neighbor"

"Georgette Bennett is not one to stand idly by, and when confronted with the Syrian refugee crisis of historic proportions, she dove in to find a way to help. She never took no for an answer, pulled out all the stops to corral governments, armies, organizations, and civil society to stop their real wars and their turf wars to cooperate, at least in the 'crevices,' to help people most in need on a huge scale. This is humanitarian diplomacy at its best, engineered by a civilian Jewish woman of conviction in a region where any or all of those can get you in huge trouble. Not only is the blow by blow riveting, but here is a story to inspire all of us to use what we have at our disposal to help each other as humans, and to get past the rigidities which have left way too many as collateral damage."
— Anthony Marx, President and CEO, New York Public Library

"Georgette Bennett has turned her life story into a force for humanity. When she sees suffering, she takes personal and moral responsibility to do something about it. The Syria war is a stain on humanity and this book shows what it means to stand by Syrians suffering at the hands of their own government. The world needs more people like Georgette."
— David Miliband, President, International Rescue Committee and former UK Foreign Secretary

"Georgette Bennett is truly one of our better angels, caretaking all of us by caretaking those most in need: Syrian refugees. A child of the Holocaust, she is also the woman who established the Multifaith Alliance for Syrian refugees. Refugees everywhere need everyone's help all over the world and Georgette Bennett is on the front lines of it all. We owe her a debt of gratitude."
— Mandy Patinkin, Actor, Activist on behalf of refugees

"This remarkable book is a testament to three things: first, the inhumanity that persists in the world, seen in the brutal treatment by the Syrian regime of millions of its own people. Second, the painstaking, behind-the-scenes and largely thankless work that goes into trying to help those suffering on a massive scale. And third, the difference one person can make. It's the story of Georgette Bennett, private citizen with a steely determination to come to their rescue, who found the unlikeliest of benefactors, and to this day, simply refuses to give up."
— Judy Woodruff, Anchor and Managing Editor, The PBS NewsHour

"Blessed are the peacemakers and blessed is Georgette Bennett. In this fascinating and well-written book, she describes her dogged efforts to help those devastated by conflict and search for ways to bring people of differing faiths together. The stories she tells us an important reminder that we could all do more to try to make the world a better place."
— Fareed Zakaria, Host, CNN GPS

This feature require that you enable JavaScript in your browser.
END_OF_DOCUMENT_TOKEN_TO_BE_REPLACED

This feature require that you enable JavaScript in your browser.
END_OF_DOCUMENT_TOKEN_TO_BE_REPLACED

This feature require that you enable JavaScript in your browser.
END_OF_DOCUMENT_TOKEN_TO_BE_REPLACED