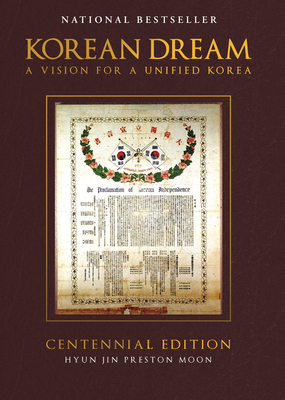 Korean Dream: A Vision for a Unified Korea is a powerful call to action for Koreans and supporters everywhere to achieve a new nation, rooted in a common past. In this Centennial Edition, which debuted on several bestseller lists including the Wall Street Journal, LA Times, and Publishers Weekly, Dr. Hyun Jin Preston Moon presents an innovative way forward for the Korean Peninsula that at its heart is Korean led. Ultimately, Korean reunification is the only long-term solution to security, economic, and social problems created through a 70-year division of the Peninsula.

Korean Dream Empowers the Korean People to Rediscover Their Historic Identity. Dr. Moon's vision empowers the Korean people to rediscover their 5,000-year-old historic identity and take it upon themselves to lead the way toward a peaceful reunification of the peninsula. A Nation Built on Shared History and Heritage. For reunification to happen, modern South Korea must recognize and embrace its shared history, heritage and culture. South Korea's surging economy and decades of separation caused many to lose sight of its past and common connection with Koreans in the North. A Korean-led Future with Universal Principles and Values. Korea must represent the goals of its people in the form of a popular, representative form of government. A reunified Korea must give the Korean people the same freedoms and human rights that the American people and others around the world have today. Live for the Greater Benefit of All Humanity. Hongik Ingan defines the hope, potential, and strength of the Korean people. Korean Dream is devoted to the welfare of mankind in working toward reunification, drawing support from participants regarding human rights, universal spiritual principles and natural law toward a civic society. The Role of Civil Society and NGOs. Civic associations are the heart of a thriving democracy; a medium through which citizens contribute to and build the life of the national community. The Korean people must engage with one another and civic associations to address issues in local areas beyond the scope of government. Reunification is Only the First Step. Beyond Korean reunification, the Korean people would be in a position to become global advocates on the basis of high moral principles. These principles of the Korean Dream will become a global call for realizing a world that lives as One Family under God.

This feature require that you enable JavaScript in your browser.
END_OF_DOCUMENT_TOKEN_TO_BE_REPLACED

This feature require that you enable JavaScript in your browser.
END_OF_DOCUMENT_TOKEN_TO_BE_REPLACED

This feature require that you enable JavaScript in your browser.
END_OF_DOCUMENT_TOKEN_TO_BE_REPLACED