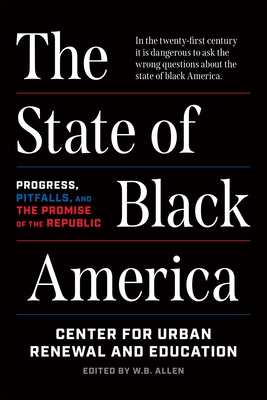 An incisive collection of essays that reveals the past, present, and future strength of black America as the best hope for a nation that has lost faith in itself.

"A much-needed antidote to the madness-inducing contradiction of woke orthodoxy." --The Honorable Judge Janice Rogers Brown

In a nation that is tearing itself apart over race, trying to speak honestly about the state of black America is a perilous task. Candor and thoughtfulness are often drowned by hysteria, expediency, and sentimentalism. The State of Black America seeks to restore these sorely needed virtues to the present discourse, assembling a company of scholars who confront our nation's troubled racial history even as they bear witness to the promise the American heritage contains for blacks.

The essays in this volume bring clarity to the murky darkness of America's race debates, reviewing and building upon the latest scholarship on the character, shape, and tendencies of life for black Americans. Together, they tell a story of black America's astounding success in integrating into mainstream American culture and propose that black patriotism is the key to overcoming what problems remain.

Featuring scholarship from a variety of disciplines, including history, economics, social science, and political philosophy, The State of Black America offers to the world a "toolbox" of intellectual resources to aid careful and sound thinking on one of the most fraught issues of our time.

The Center for Urban Renewal and Education (CURE) is a public policy institute devoted to developing and promulgating policy solutions focused on America's distressed zip codes. CURE was founded in 1995 by Star Parker and is based in Washington, D.C. To learn more, please visit curepolicy.org.

This feature require that you enable JavaScript in your browser.
END_OF_DOCUMENT_TOKEN_TO_BE_REPLACED

This feature require that you enable JavaScript in your browser.
END_OF_DOCUMENT_TOKEN_TO_BE_REPLACED

This feature require that you enable JavaScript in your browser.
END_OF_DOCUMENT_TOKEN_TO_BE_REPLACED