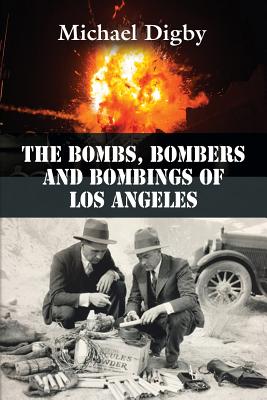 By Michael Digby
Email or call for price/availability

It may be hard to imagine that there was ever a time in American history when terrorist and criminal bombings were as commonplace as today's daily acts of gang violence. But for more than a century, long before the words 'Al Qaeda' or 'ISIS' ever became part of our national media lexicon, bombings have played a significant part in American crime annals, including right here in Southern California.

There were car and truck bombs, mail bombs, suicide-homicide bombers, train and airplane bombings, gangster bombers, lunatics with bombs, committed terrorists and extremist bombers. Some bombers, motivated by delusional fantasy or outright hatred, targeted police officers, firefighters, and medical personnel while other bombers, acting out their thuggish behavior, set bombs as booby-traps which randomly targeted innocent civilians. Whether big bombs or little bombs, there was absolutely no shortage of bombing incidents.

For much of the Twentieth Century, all that stood between absolute anarchy and the maintenance of law and order were the police officers, detectives, intelligence specialists and bomb disposal officers who faced down the bombs and bombers alike. Sadly, much of their work is largely forgotten.

Within this book are the stories of some of these bombings. Presented as well-researched historical case studies of bombings that occurred between 1896 and 2012, the author, himself a veteran detective and bomb technician, offers a look at just a few of the many bombs, bombers, and bombings that have plagued the Los Angeles area for more than a hundred years.

END_OF_DOCUMENT_TOKEN_TO_BE_REPLACED

This feature require that you enable JavaScript in your browser.
END_OF_DOCUMENT_TOKEN_TO_BE_REPLACED

This feature require that you enable JavaScript in your browser.
END_OF_DOCUMENT_TOKEN_TO_BE_REPLACED

This feature require that you enable JavaScript in your browser.
END_OF_DOCUMENT_TOKEN_TO_BE_REPLACED