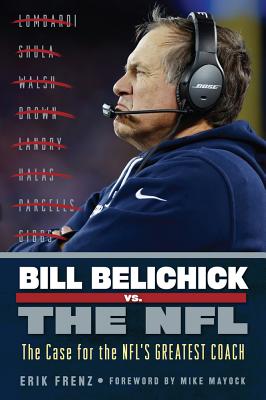 Bill Belichick started collecting Lombardi Trophies like some people collect coasters and won his fourth Super Bowl title in 2015. No other NFL team has been as successful since Belichick became the Patriots' head coach in 2000, winning titles after the 2001, 2003, 2004, and 2014 seasons, along with Super Bowl appearances after the 2007 and 2011 seasons. But is Belichick the best NFL coach of all time? In Bill Belichick vs. the NFL, author Erik Frenz not only explains what separates Belichick from his peers and compares his accomplishments to some of the all-time legends, but tells why, if there were a Mount Rushmore of NFL coaches, Belichick’s face would already be on it. From his upbringing as a coach's son to learning under Bill Parcells to creating his own coaching tree, he has established a new standard that may be unparalleled in football history.

Erik Frenz is a NFL writer currently covering the Patriots and the AFC East for Bleacher Report and Boston.com. He lives in Watertown, Massachusetts. Mike Mayock has been an analyst for the NFL Network since 2005. He resides in Culver City, California.

This feature require that you enable JavaScript in your browser.
END_OF_DOCUMENT_TOKEN_TO_BE_REPLACED

This feature require that you enable JavaScript in your browser.
END_OF_DOCUMENT_TOKEN_TO_BE_REPLACED

This feature require that you enable JavaScript in your browser.
END_OF_DOCUMENT_TOKEN_TO_BE_REPLACED