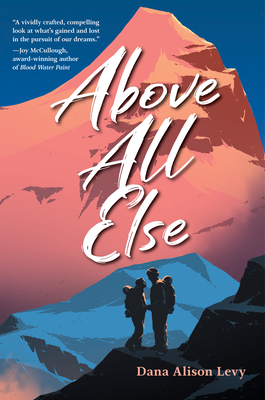 By Dana Alison Levy
$18.99
Email or call for price/availability

In a novel as riveting, irresistible, and heartbreaking as Into Thin Air, teen climbing prodigies Rose and Tate attempt to summit--and survive--Mount Everest.

Rose Keller and Tate Russo have been climbing for years, training in harsh weather and traveling all over the world. The goal that kept them going? Summiting Mount Everest, the highest point on earth. Accompanied by Tate's dad, the two will finally make the ultimate climb at the end of their senior year. But neither Rose nor Tate are fully in the game--not only is there a simmering romance between them, but Rose can't get her mind off her mother's illness, while Tate constantly fails to live up to his ambitious father's standards.

Everyone on their expedition has something to prove, it seems. And not everyone is making the best decisions while short on oxygen and exhausted, body and mind. The farther up the mountain they go, the more their climbing plans unravel and the more isolated each team member becomes. Rose and Tate will have to dig deep within themselves to determine what--or who--they value above all else.

Dana Alison Levy has written several lauded middle grade novels. Above All Else is her YA debut. She was born and raised in New England and lives in Massachusetts.

Two friends embark on an emotional and physical challenge.
Rose and Tate have been lifelong friends, traveling the world and summiting mountains together. Now, at the end of their senior year of high school, they’re going for the big one—Mount Everest. But Rose feels conflicted about climbing without her mother, and Tate has a terrifying secret. Their journey from San Francisco to the highest altitude in the world tests their physical and mental strength and endurance. The isolation and harsh conditions force the pair to examine their feelings for one another as well as their motivations for climbing and the impact of the tourist trade on the environment, culture, and people of Nepal. Each chapter begins with the date, altitude, and location, helpfully setting the scene for a narrative that alternates between Tate and Rose, with some chapters acting as flashbacks. Setting and character details abound, deftly balanced with Tate and Rose’s emotionally engaging relationship. This combination allows readers to feel the dangers of climbing, the anticipation of trying for the summit, and the firecracker chemistry between the leads. A map provides context, and an author’s note offers insight into the multiple meanings of sherpa/Sherpa, further reading, and organizations that support Nepalese people, specifically Sherpa families affected by accidents on Everest. Rose is biracial (with a White dad and Puerto Rican mom); Tate is White and has ADHD.
An engrossing, suspenseful, and thought-provoking adventure.
—Kirkus Reviews


Rose and Tate are your average high-school seniors from California, but they’re also legacy mountain climbers embarking on the trip of a lifetime. As they prepare to climb Mount Everest along with Tate’s father, the two teens are simultaneously riddled with life’s “big questions”: where they’ll go to college and whom they want to date. These are soon overshadowed by more dire questions, however, as a tragedy befalls the Sherpas right before the scheduled climb. Tate’s PTSD is triggered, and the dynamics between family and friends begin to unravel. Levy’s fast-paced novel mirrors the frantic, heartrending, and blood-pumping journey undertaken by her characters. Thanks to a detailed map of the mountain routes, readers can track Rose and Tate’s adventures as they wind around each other like climbing ropes, their stories dovetailing into a passionate, climactic romance. As they explore their reciprocated feelings, they must put aside disagreements and work together to survive the climb. A physical and emotional expedition, filled with danger, death, disease, and above all else, sacrifice.


Equal parts high-stakes adventure and introspective teen drama, Levy's YA debut is an examination of a commercialized natural world and the burden of unchecked expectations. In fast-paced, alternating first person chapters, readers follow two teenaged best friends as they attempt to summit Mount Everest. Tate, unfocused and brash, is (to his chagrin) known as the "Master of Disaster," while Rose is calculated and driven. Though both protagonists are seasoned climbers, their ascent becomes increasingly complicated—most notably by Tate's debilitating PTSD after a recent fall, Rose's nonstop fear (identified as "the Dread") for her sick mother, and the normally platonic pair's burgeioning sexual relationship. A large cast of secondary characters weaves in and out of the story, providing effective springboards to address issues such as racism, sexism, labor exploitation, and mental health. A confluence of events at the novel's climax pushes Tate and Rose apart and past their reconceived limits, with tragic results that call into question the ethics of their once-shared goal. A hopeful epilogue narrated by Tate balances out the harrowing conclusion; back matter includes information about the Sherpa people and an author's note with further reading.
—The Horn Book

This feature require that you enable JavaScript in your browser.
END_OF_DOCUMENT_TOKEN_TO_BE_REPLACED

This feature require that you enable JavaScript in your browser.
END_OF_DOCUMENT_TOKEN_TO_BE_REPLACED

This feature require that you enable JavaScript in your browser.
END_OF_DOCUMENT_TOKEN_TO_BE_REPLACED