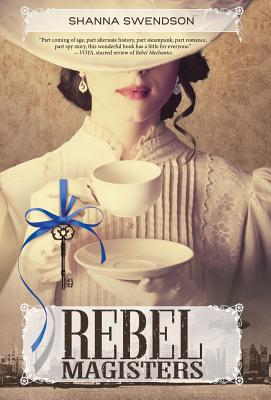 This is book number 2 in the Rebels series.

The Rebel Mechanics aren't the only group plotting revolution against the magical British Empire. There are rebel magisters, as well, and Verity Newton and her magister employer, Lord Henry, know that the only way for the revolution to succeed is if both groups work together. A diplomatic mission seems like the perfect opportunity for them to meet with rebels in other colonies and gather support-right under the governor's nose.

From drawing rooms, ballrooms, and the harbor in Boston to the streets of Charleston, Verity and Henry find themselves up against stubborn factions of both magisters and Mechanics and increasingly aware that they can only really count on each other as their relationship deepens. It may take a real crisis to unite the rebel movements and rally them to the cause-but could such a crisis also tear them apart?

This feature require that you enable JavaScript in your browser.
END_OF_DOCUMENT_TOKEN_TO_BE_REPLACED

This feature require that you enable JavaScript in your browser.
END_OF_DOCUMENT_TOKEN_TO_BE_REPLACED

This feature require that you enable JavaScript in your browser.
END_OF_DOCUMENT_TOKEN_TO_BE_REPLACED