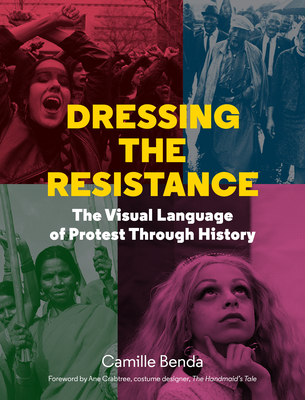 Dressing the Resistance is a celebration of how we use clothing, fashion, and costume to ignite activism and spur social change.

Weaving together historical and current protest movements across the globe, Dressing the Resistance explores how everyday people and the societies they live in harness the visual power of dress to fight for radical change. American suffragettes made and wore dresses from old newspapers printed with voting slogans. Male farmers in rural India wore their wives' saris while staging sit-ins on railroad tracks against government neglect. Costume designer and dress historian Camille Benda analyzes cultural movements and the clothes that defined them through over 150 archival images, photographs, and paintings that bring the history of activism to life, from ancient Roman rebellions to the #MeToo movement, from twentieth-century punk subcultures to Black Lives Matter marches.

Camille Benda is an LA-based costume designer and Head of Costume Design at California Institute of the Arts, School of Theater. Benda designs costumes for film, theater, and commercials across the US and Europe and regularly speaks on dress history topics. She has a Masters of Fine Art in Theatre Design from Yale School of Drama, and a Masters of Art from the Courtauld Institute in the History of Dress.


"Benda, a costume designer and dress historian, tells the story in more than 150 images, photos and paintings with loads of context in text. Take the simple topi hat, a khadi cloth envelope style popular during India’s fight for self-rule. The British authorities banned it, throwing fuel on the fire."
—Associated Press,


"Clothing can be anything the wearer wants it to be, from a symbol of personal expression, to a class signi­fier, to simply the thing that keeps one protected from the elements....In Dressing the Resistance: The Visual Language of Protest Through History, author, costume designer, and dress historian Camille Benda explores all the ways in which fashion has been used by women as a tool of activism."
- BUST

"Here’s why you will like Dressing the Resistance: The Visual Language of Protest Through History: first, because it weaves historical and current protest movements across the globe with the power of clothing to fight for radical change; and second, because it will give you the most obscure trivia knowledge of the dresses American suffragettes wore (they were made of old newspapers printed with voting slogans). And third, because it includes a foreword by Ane Crabtree, the costume designer of The Handmaid’s Tale."
- Fast Company,

END_OF_DOCUMENT_TOKEN_TO_BE_REPLACED

This feature require that you enable JavaScript in your browser.
END_OF_DOCUMENT_TOKEN_TO_BE_REPLACED

This feature require that you enable JavaScript in your browser.
END_OF_DOCUMENT_TOKEN_TO_BE_REPLACED

This feature require that you enable JavaScript in your browser.
END_OF_DOCUMENT_TOKEN_TO_BE_REPLACED