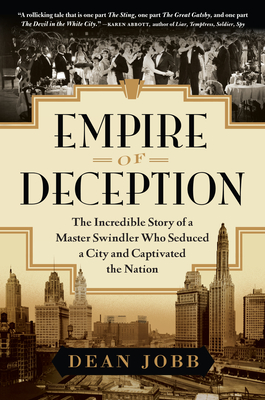 By Dean Jobb
Email or call for price.
Hard to Find

This entertaining account of charming con man Leo Koretz takes us from his early days in Prohibition-era Chicago selling fake mortgages to his decades selling shares in non-existent Panamanian oil fields.  Using the same scheme as Ponzi only to greater gain, he swindles millions of dollars from wealthy businessmen and family.  After being exposed, he flees to Nova Scotia and takes on a new persona as Lou Keyte.  Living as flamboyantly as he did in Chicago, he can’t help but eventually be tracked down.  This real-life tale of extravagance, greed, and deception will be enjoyed by anyone who likes to read about brash scoundrels and their victims who forget “If something is too good to be true, it probably is.”

“A brilliantly researched tale of greed, ambition, and our desperate need to believe in magic, it’s history that captures America as it really was--and always will be. A great read.” —Douglas Perry, author of Eliot Ness

It was a time of unregulated madness. And nowhere was it madder than in Chicago at the dawn of the Roaring Twenties. As Model Ts rumbled down Michigan Avenue, gang war shootings announced Al Capone’s rise to underworld domination. Bedecked partygoers thronged to the Drake Hotel’s opulent banquet rooms, corrupt politicians held court in thriving speakeasies, and the frenzy of stock market gambling was rampant.

Enter a slick, smooth-talking, charismatic lawyer named Leo Koretz, who enticed hundreds of people (who should have known better) to invest as much as $30 million--upwards of $400 million today--in phantom timberland and nonexistent oil wells in Panama. It was an ingenious deceit, one that out-ponzied Charles Ponzi himself, who only a few years earlier had been arrested for a pyramid scheme. Leo had a good run--his was perhaps the longest fraud in history--and when his enterprise finally collapsed in 1923, he vanished. The Cook County state’s attorney, a man whose lust for power equaled Leo’s own lust for money, began an international manhunt that lasted almost a year. When finally apprehended, Leo was living a life of luxury in Nova Scotia under the assumed identity of a book dealer and literary critic. A salacious court hearing followed, and his mysterious death in a Chicago prison rivaled the rest of his almost-too-bizarre-to-believe life.

A rip-roaring tale of greed, financial corruption, dirty politics, over-the-top and under-the-radar deceit, illicit sex, and a brilliant and wildly charming con man on the town and then on the lam, Empire of Deception has it all. It’s not only a rich and detailed account of a man and an era; it’s a fascinating look at the methods of swindlers throughout history. Leo Koretz was the Bernie Madoff of his day, and Dean Jobb shows us that the American dream of easy wealth is timeless.

“The granddaddy of all con men, Leo Koretz gives Jobb the opportunity to exhibit his impressive research and storytelling skills . . . [Jobb] keeps readers on edge . . . as they wait to see if Koretz might just get away with it. A highly readable, entertaining story.” —Kirkus Reviews

“A dramatic read and a useful lesson!” —Michael Korda, author of Charmed Lives

“Begin with a Bernie Madoff–wolf-in-sheep’s-clothing con man pursued by a power-hungry public prosecutor; add the great hog-trough feeding frenzy of 1920s Chicago; stir with great writing and enterprising research; and there you have it: a wonderfully entertaining read!”  —Michael Lesy, author of Murder City

“Dean Jobb’s story of con man Leo and his pathetically gullible and mostly rich victims perfectly captures the flavor of Chicago in the Roaring Twenties. What a great caper movie this would make!” —Marq de Villiers, author of Our Way Out

“Reads like a Gatsby-Ponzi mashup. A guilty-pleasure reminder that the most audacious bad guys have always been the most entertaining. Kudos to Jobb for unearthing this overlooked story and bringing to life a charming, witty, naughty, iconic American crook.” —Neal Thompson, author of A Curious Man

“Dean Jobb has found a fascinating yet little-known jazz-age tale and told it with style and smarts.” —Jonathan Eig, author of Get Capone

Dean Jobb is an award‑winning author and journalist and a professor at the University of King's College in Halifax, Nova Scotia, where he teaches in the graduate creative nonfiction and journalism programs. He is the author of six previous books, including Empire of Deception, which the New York Times Book Review called “intoxicating and impressive” and the Chicago Writers Association named the Nonfiction Book of the Year. Jobb has written for major American and Canadian newspapers and magazines, including the Chicago Tribune, the American Journalism Review, and Toronto’s Globe and Mail, and his monthly true‑crime column, “Stranger Than Fiction,” appears in Ellery Queen’s Mystery Magazine. His work as an investigative reporter has been nominated for Canada’s National Newspaper and National Magazine awards, and Jobb is a three‑time winner of Atlantic Canada’s top journalism award.

“Comprehensively researched and enthralling . . . High-stakes hijinks give the story a rollicking feel, but Jobb manages great poignancy, too. . . This lively and sweeping account seems to have already given a master con artist his due, putting him in the ‘pantheon of pyramid-building swindlers.’” —The Washington Post

“This cautionary tale of 1920s greed and excess reads like it could happen today.” —The Associated Press

“Jobb vividly, albeit briefly, brings the Chicago of the 1880s and ‘90s to life . . . [and] is a masterpiece of narrative set-up and vivid language.” —Chicago Tribune

“Dean Jobb skillfully dusts off this century-old tale with a fast-paced narrative, a keen eye for detail and a cast of characters in which the free-for-all city of Chicago plays a prominent role . . . [A] masterfully told story.” —Minneapolis Star Tribune
“Jobb expertly mixes newspaper research with witness interviews to weave a rollicking narrative. . . .The result is a memorable, fast-moving work of history.”—Atlanta Jewish Times
“[A]n intriguing story. . . In our own wealth-besotted times, this well-researched story of Leo Koretz is a cautionary tale.”—Washington Independent Review of Books
“Peppered with contemporaneous photos depicting the key players and the swanky places, phony stock certificates, newspaper headlines, and even a 'wanted' posted, Empire of Deception is a jaw-dropping, rollicking good read.”—Booklist
“This lively, entertaining, and depressingly relevant history of a man and his con reads like a novel and will be enjoyed by fans of popular history as well as true crime.” —Library Journal, starred review

This feature require that you enable JavaScript in your browser.
END_OF_DOCUMENT_TOKEN_TO_BE_REPLACED

This feature require that you enable JavaScript in your browser.
END_OF_DOCUMENT_TOKEN_TO_BE_REPLACED

This feature require that you enable JavaScript in your browser.
END_OF_DOCUMENT_TOKEN_TO_BE_REPLACED