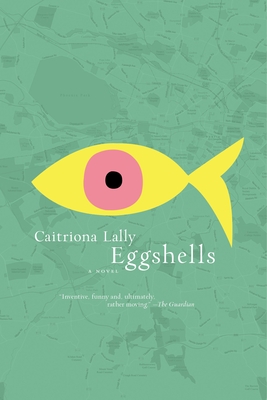 Vivian, accused of being a changeling when she was a child, now lives alone in a ramshackle house in Dublin. Each day she painstakingly travels the city streets searching for the magic portal that will take her to her true home. Odd and compulsive behaviors cause those around her to publicly judge her as eccentric and privately label her mad. But when Vivian advertises for a friend and meets Penelope, the two create a singular bond of recognition and respect. Just as fellow Dubliner Leopold Bloom wandered for a day, so does Vivian earnestly roam through the city, carefully documenting both its delights and dark corners with curiosity and deadpan humor. Vivian will break your heart with her honesty and simple desire to be accepted.

“This quirky little novel is such a delight! Reading Irish authors is typically a bit of a struggle for me - their style is almost too unusual at times. With Eggshells, I felt like I was reading an incredibly charming yet melancholy story while also poking around in the deep recesses of the mind of an exceptionally vivid personality. You will laugh, you will raise your eyebrows, and your heart will break as you follow Vivian around on her daily wanderings as she tries desperately to find the 'other world' where she belongs. Lally has made it so easy to walk around in someone else's very unique shoes - a subtle lesson in empathy that can always be re-learned.”
— Hannah Hyde (W), Little Shop of Stories, Decatur, GA

A whimsical, touching debut about loneliness, friendship and hope...

Vivian doesn't feel like she fits in - and never has. As a child, she was so whimsical that her parents told her she was "left by fairies." Now, living alone in Dublin, the neighbors treat her like she's crazy, her older sister condescends to her, social workers seem to have registered her as troubled, and she hasn't a friend in the world.

So, she decides it's time to change her life: She begins by advertising for a friend. Not just any friend. She wants one named Penelope.

Meanwhile, she roams the city, mapping out a new neighborhood every day, seeking her escape route to a better world, the other world her parents told her she came from.

And then one day someone named Penelope answers her ad for a friend. And from that moment on, Vivian's life begins to change.

Debut author Caitriona Lally offers readers an exhilaratingly fresh take on the Irish love for lyricism, humor, and inventive wordplay in a book that is, in itself, deeply charming, and deeply moving.

Caitriona Lally studied English Literature in Trinity College Dublin.  She has had a colourful employment history, working as an abstract writer and a copywriter alongside working as a home helper in New York and an English teacher in Japan. She has traveled extensively around Europe, Asia, the Middle East, and South America.  Caitriona was shortlisted for 'Newcomer of the Year' in the Irish Book Awards in 2015.

"This urban fairy tale delivers something that is both subtle and profound in its examination of the human soul. Magically delicious." —KIRKUS REVIEWS

"A whimsical jaunt through Dublin and a modern take on many old Irish folktales...Humorous, charming, and original." —BOOKLIST

"Full of action and humour as its beguiling narrator takes her surreal jaunts around the capital in search of a portal to another world. ...The black comedy gives the book a jaunty quality that complements the dazzling trip around Dublin." -- Sarah Gilmartin, THE IRISH TIMES

"Delightfully quirky... Vivian's voice alone is enough to keep us reading, charmed by her unique brand of manic, word-hoarding wit." —THE IRISH INDEPENDENT

"The book's style calls to mind The Curious Incident of the Dog in the Night-Time by Mark Haddon. Engaging and humorous." —THE DUBLIN INQUIRER

END_OF_DOCUMENT_TOKEN_TO_BE_REPLACED

This feature require that you enable JavaScript in your browser.
END_OF_DOCUMENT_TOKEN_TO_BE_REPLACED

This feature require that you enable JavaScript in your browser.
END_OF_DOCUMENT_TOKEN_TO_BE_REPLACED

This feature require that you enable JavaScript in your browser.
END_OF_DOCUMENT_TOKEN_TO_BE_REPLACED