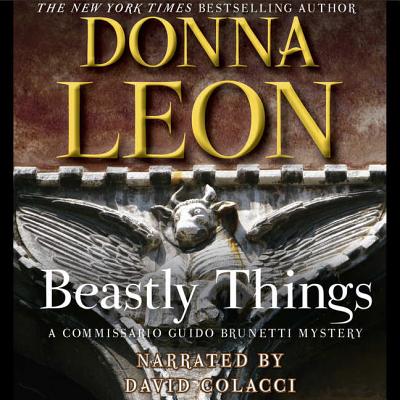 This is book number 21 in the Commissario Guido Brunetti Mysteries (Audio) series.

“When Brunetti begins to investigate a murder, the corpse turns out to have been a veterinarian beloved by all whose animals he treated. Why, then, did such a man work in a slaughterhouse? And what exactly was his role there? As in many of the excellent Venetian mysteries of Leon, ethics are the true subject under investigation: the ethics of the abattoir and of the consumption of meat; the ethics of decent people who, when threatened, test the waters of illegality; and the ethics of the police - always a subject for dissection in the mind of Brunetti. This may be Leon's best yet - high praise indeed.”
— Betsy Burton, The King's English, Salt Lake City, UT

When the body of man is found in a canal, damaged by the tides, carrying no wallet, and wearing only one shoe, Brunetti has little to work with. No local has filed a missing-person report, and no hotel guests have disappeared. Where was the crime scene? And how can Brunetti identify the man when he can't show pictures of his face? The autopsy shows a way forward: it turns out the man was suffering from a rare, disfiguring disease. With Inspector Vianello, Brunetti canvasses shoe stores and winds up on the mainland in Mestre, outside of his usual sphere. From a shopkeeper, they learn that the man had a kindly way with animals. At the same time, animal rights and meat consumption are quickly becoming preoccupying issues at the Venice Questura and in Brunetti's home, where conversation at family meals offers a window into the joys and conflicts of Italian life. Perhaps with the help of Signorina Elettra, Brunetti and Vianello can identify the man and understand why someone wanted him dead.As subtle and engrossing as ever, Leon's Beastly Things is immensely enjoyable, intriguing, and ultimately moving.

Donna Leon has lived in Venice for over twenty-five years and previously lived in Switzerland, Saudi Arabia, Iran and China, where she worked as a teacher. Her previous novels featuring Commissario Brunetti have all been highly acclaimed.

END_OF_DOCUMENT_TOKEN_TO_BE_REPLACED

This feature require that you enable JavaScript in your browser.
END_OF_DOCUMENT_TOKEN_TO_BE_REPLACED

This feature require that you enable JavaScript in your browser.
END_OF_DOCUMENT_TOKEN_TO_BE_REPLACED

This feature require that you enable JavaScript in your browser.
END_OF_DOCUMENT_TOKEN_TO_BE_REPLACED