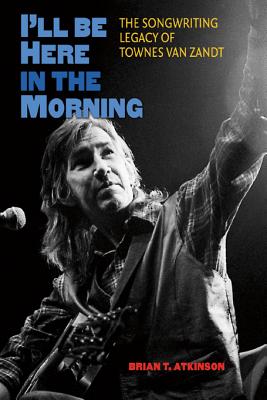 The writer of such influential songs as “Pancho and Lefty,” “To Live’s to Fly,” “If I Needed You,” and “For the Sake of the Song,” Townes Van Zandt exerted an influence on at least two generations of Texas musicians that belies his relatively brief, deeply troubled life. Indeed, Van Zandt has influenced millions worldwide in the years since his death, and his impact is growing rapidly. Respected singer/songwriter John Gorka speaks for many when he says, “‘Pancho and Lefty’ changed—it unchained—my idea of what a song could be.” In this tightly woven, intelligently written book, Brian T. Atkinson interviews both well-known musicians and up-and-coming artists to reveal, in the performers’ own words, how their creative careers have been shaped by the life and work of Townes Van Zandt. Kris Kristofferson, Guy Clark, Billy Joe Shaver, Rodney Crowell, Lucinda Williams, and Lyle Lovett are just a few of the established musicians who share their impressions of the breathtakingly beautiful tunes and lyrics he created, along with their humorous, poignant, painful, and indelible memories of witnessing Van Zandt’s rise and fall. Atkinson balances the reminiscences of seasoned veterans with the observations of relative newcomers to the international music scene, such as Jim James (My Morning Jacket), Josh Ritter, and Scott Avett (the Avett Brothers), presenting a nuanced view of Van Zandt’s singular body of work, his reckless lifestyle, and his long-lasting influence. Forewords by “Cowboy” Jack Clement and longtime Van Zandt manager and friend Harold F. Eggers Jr. open the book, and each chapter begins with an introduction in which Atkinson provides context and background, linking each interviewee to Van Zandt’s legacy. Historians, students, and fans of all music from country and folk to rock and grunge will find new insights and recall familiar pleasures as they read I’ll Be Here in the Morning: The Songwriting Legacy of Townes Van Zandt.

BRIAN T. ATKINSON writes frequently for the Austin American-Statesman and has contributed to American Songwriter, No Depression, Maverick Country, Relix, Paste, Texas Music, and Lone Star Music magazines, among others. He lives in Austin.

"When I got to Austin in 1973, the songwriter's songwriter was Townes Van Zandt. It's been that way ever since. As each and every songwriter in Brian Atkinson's wonderful book attests to, it's all for the sake of the song."--Joe Nick Patoski, author of Willie Nelson: An Epic Life and Stevie Ray Vaughan: Caught in the Crossfire

“Atkinson takes testimony from the right people—those close enough to Townes Van Zandt in his best days to be there at the telling moments, and some moved by him later and able to talk about it—and comes away with a memorable, telling, often funny group portrait. Commendably, I’ll Be Here in the Morning celebrates the sporadically brilliant, artful song maker and intellect Van Zandt was at his best, and avoids further romanticizing the driven, sadly self-destructive man lurking behind the songs.”--Barry Mazor, journalist and author, Meeting Jimmie Rodgers

"My friend and fellow musician, Professor Craig Clifford at Tarleton State University, ranks Townes Van Zandt at the top of his list of 'Ruthlessly Poetic Songwriters.' This insightful phrase truly captures the essence of Townes, his work, and his legacy. Brian Atkinson brilliantly brings the term, 'Ruthlessly Poetic,' to life and into context with his new biography of Townes, I'll Be Here in the Morning: The Songwriting Legacy of Townes Van Zandt."--Craig Hillis, Austin musician and Musicologist

"I'll Be Here in the Morning stands as an affectionate look at Van Zandt that doesn't fall into the trap of romanticizing the reason he needs to be remembered posthumously in the first place."--Andrew Gilstrap, Pop Matters

"Townes remains endlessly fascinating as we trace his fatalistic plunge into self-destruction, as he all the while leaves great songs in his wake."--CMT.com

"In the book's pages, Van Zandt emerges as a man of limitless talent and innate curiosity, a man of great kindness, intellect and gentility but also of unfathomable excesses. Those who knew him the best and loved him the most weight in with clear-eyed honesty."--Peter Cooper, The Tennesean

"...sharp and interesting profiles of all the musicians interviewed...the result is candid and insightful..."--Martin Chilton, Telegraph.co.uk

“Townes Van Zandt got about as deep as you can get. He was an amazing songwriter, so sharp and sophisticated. He could say really hard things in a very simple way that makes you feel connected to him. That’s why there are a lot of comparisons to my grandfather.”--Hank Williams III

" By interviewing such a wide range of singers and songwriters, Atkinson sought to put Van Zandt into context of the evoloving left wing of country music. Atkinson shows how Van Zandt's comtemporaries saw him and felt his influence, as well as the way his unusually literate lyrics influenced new genrations of musicians."-- Chuck Vollan, Department of History and Political Science, South Dakota State University
— Chuck Vollan

END_OF_DOCUMENT_TOKEN_TO_BE_REPLACED

This feature require that you enable JavaScript in your browser.
END_OF_DOCUMENT_TOKEN_TO_BE_REPLACED

This feature require that you enable JavaScript in your browser.
END_OF_DOCUMENT_TOKEN_TO_BE_REPLACED

This feature require that you enable JavaScript in your browser.
END_OF_DOCUMENT_TOKEN_TO_BE_REPLACED