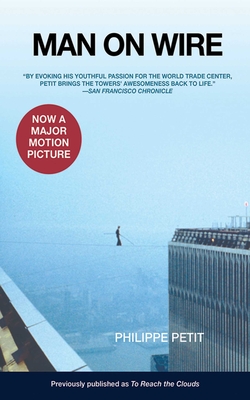 It wasn’t possible. Any one of a thousand things could have gone wrong. And yet in 1974 Philippe Petit, a young, brash, self-taught street performer strung a wire between the towers of the World Trade Center and walked across. Not just walked: for 45 minutes he hopped, ran, danced, knelt, and lay down, captivating the eyes of the world. His story is riveting; his writing style, completely captivating. Astonishingly, though we all know how it turned out, the suspense is so great that at several points I actually had to remind myself to breathe. Abundant photos and illustrations greatly enhance the tale.

More than a quarter-century before September 11, 2001, the World Trade Center was immortalized by an act of unprecedented daring and beauty. In August 1974, a young Frenchman named Philippe Petit boldly—and illegally—fixed a rope between the tops of the still-young Twin Towers, a quarter mile off the ground. At daybreak, thousands of spectators gathered to watch in awe and adulation as he traversed the rope a full eight times in the course of an hour. In Man on Wire, Petit recounts the six years he spent preparing for this achievement. It is a fitting tribute to those lost-but-not-forgotten symbols of human aspiration—the Twin Towers.

This feature require that you enable JavaScript in your browser.
END_OF_DOCUMENT_TOKEN_TO_BE_REPLACED

This feature require that you enable JavaScript in your browser.
END_OF_DOCUMENT_TOKEN_TO_BE_REPLACED