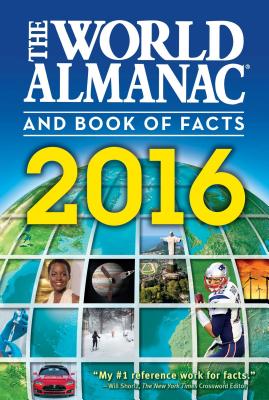 Get thousands of facts right at your fingertips with this essential resource. The World Almanac(R) and Book of Facts is America's top-selling reference book of all time, with more than 82 million copies sold. Since 1868, this compendium of information has been the authoritative source for all your entertainment, reference, and learning needs. The 2016 edition of The World Almanac(R) reviews the events of 2015 and will be your go-to source for any questions on any topic in the upcoming year. Praised as a treasure trove of political, economic, scientific and educational statistics and information by The Wall Street Journal, The World Almanac(R) and Book of Facts will answer all of your trivia needs--from history and sports to geography, pop culture, and much more. Features include:
The Year in Review: The World Almanac(R) takes a look back at 2015 while providing all the information you'll need in 2016. 2015--Top 10 News Topics: The editors of The World Almanac(R) list the top stories that held their attention in 2015.
- 2015--Year in Sports: Hundreds of pages of trivia and statistics that are essential for any sports fan, featuring complete coverage of the first College Football Playoff, the Women's World Cup, 2015 World Series, and much more.
- 2015--Year in Pictures: Striking full-color images from around the world in 2015, covering news, entertainment, science, and sports.
- 2015--Offbeat News Stories: The World Almanac(R) editors found some of the strangest news stories of the year.
- World Almanac(R) Editors' Picks: Time Capsule: The World Almanac(R) lists the items that most came to symbolize the year 2015, from news and sports to pop culture.
- U.S. Immigration: A Statistical Feature: The World Almanac(R) covers the historical background, statistics, and legal issues surrounding immigration, giving factual context to one of the hot-button topics of the upcoming election cycle.
- World Almanac(R) Editors' Picks: Most Memorable Super Bowls: On the eve of Super Bowl 50, the editors of The World Almanac(R) choose the most memorable big games.
- New Employment Statistics: Five years after the peak of the great recession, The World Almanac(R) takes a look at current and historic data on employment and unemployment, industries generating job growth, and the training and educational paths that lead to careers.
- 2016 Election Guide: With a historic number of contenders for the presidential nominations, The World Almanac(R) provides information that every primary- and general-election voter will need to make an informed decision in 2016, including information on state primaries, campaign fundraising, and the issues voters care about most in 2016.
- The World at a Glance: This annual feature of The World Almanac(R) provides a quick look at the surprising stats and curious facts that define the changing world.
- and much more.

Sarah Janssen is the senior editor of The World Almanac(R) and Book of Facts. She lives in Brooklyn, NY.

This feature require that you enable JavaScript in your browser.
END_OF_DOCUMENT_TOKEN_TO_BE_REPLACED

This feature require that you enable JavaScript in your browser.
END_OF_DOCUMENT_TOKEN_TO_BE_REPLACED

This feature require that you enable JavaScript in your browser.
END_OF_DOCUMENT_TOKEN_TO_BE_REPLACED