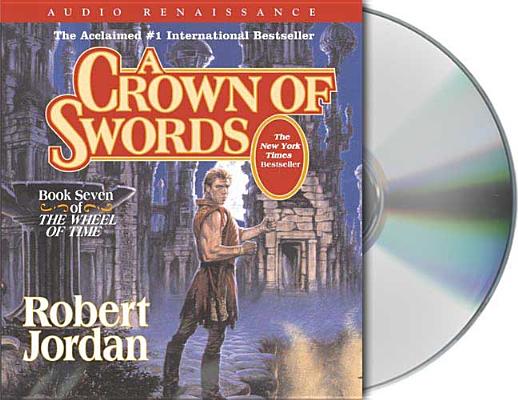 By Robert Jordan, Kate Reading (Read by), Michael Kramer (Read by)
$69.95
Email or call for price/availability

This is book number 7 in the Wheel of Time series.

In A Crown of Swords, the seventh novel in Robert Jordan’s #1 New York Times bestselling epic fantasy series, The Wheel of Time®, a rebellious uprising threatens Rand al’Thor's rule as he prepares to battle an even more dangerous enemy.

Incited by nobles seeking to reclaim their places of power, armies march against the Dragon Reborn. As Rand tries to restore order, he discovers a lack of loyalty even among the warrior Aiel, and still mistrusts the rebel Aes Sedai even though they swore allegiance.

But nothing can stop Rand and his Asha'man soldiers from storming the city of Illian to confront the Forsaken Sammael, and challenge him to a duel of the One Power with the winner taking the Crown of Swords...

Since its debut in 1990, The Wheel of Time® by Robert Jordan has captivated millions of readers around the globe with its scope, originality, and compelling characters. The last six books in series were all instant #1 New York Times bestsellers, and The Eye of the World was named one of America's best-loved novels by PBS's The Great American Read.
The Wheel of Time®
New Spring: The Novel
#1 The Eye of the World
#2 The Great Hunt
#3 The Dragon Reborn
#4 The Shadow Rising
#5 The Fires of Heaven
#6 Lord of Chaos
#7 A Crown of Swords
#8 The Path of Daggers
#9 Winter's Heart
#10 Crossroads of Twilight
#11 Knife of Dreams

“The two narrators pass the story back and forth seamlessly, keeping their characters well in hand.” —AudioFile

“Book Three of the Wheel of Time series finds the wheel of time continuing its journey toward the confrontation of Rand Al Thor, the dragon reborn, and the Dark One. Kate Reading is narrator for one strand of the story; Michael Kramer, for the others. Reading and Kramer are familiar to the series and bring back their distinct and nuanced characterizations of the major characters. The plot and characters are complex, but the book is still able to stand alone. In the hands of these two versatile narrators the audiobook is a good choice, accessible and never dull.” —AudioFile on The Dragon Reborn

“The solid performances of Kate Reading and Michael Kramer add a new dimension to the story, especially in the way these veteran narrators breathe life into the inner thoughts of the many major players.” —AudioFile on Crossroads of Twiligh

This feature require that you enable JavaScript in your browser.
END_OF_DOCUMENT_TOKEN_TO_BE_REPLACED

This feature require that you enable JavaScript in your browser.
END_OF_DOCUMENT_TOKEN_TO_BE_REPLACED

This feature require that you enable JavaScript in your browser.
END_OF_DOCUMENT_TOKEN_TO_BE_REPLACED