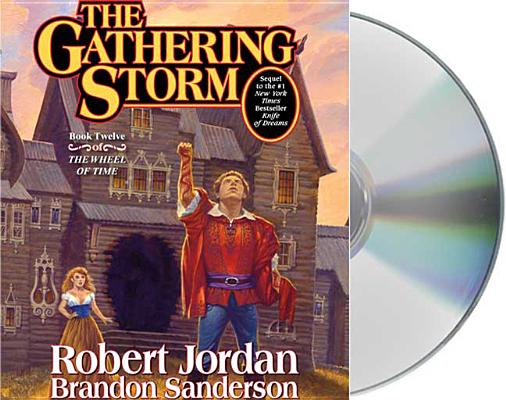 With Robert Jordan’s untimely passing in 2007, Brandon Sanderson, the New York Times bestselling author of the Mistborn novels and the Stormlight Archive, was chosen by Jordan’s editor—his wife, Harriet McDougal—to complete the final volume in The Wheel of Time®, later expanded to three books.

The Gathering Storm, the twelfth novel in Jordan’s #1 New York Times bestselling epic fantasy series, begins the story’s dramatic conclusion as Rand al'Thor, the Dragon Reborn, struggles to unite a fractured network of kingdoms and alliances in preparation for the Last Battle.

War is coming. The Dark One’s forces are brutal and unrelenting. Rand must forge a united front, but the Seanchan remain an immediate threat, as do the Forsaken. With so many shadows swirling around him, Rand is consumed by his responsibilities, turning heartless in the eyes of his allies, and even more merciless to his enemies.

Meanwhile the Seanchan march on the White Tower, where Egwene al'Vere works to rally the disparate factions of the Aes Sedai together, even as their tyrannical leader schemes against her. Providing leadership in the face of increasing uncertainty and despair, Egwene’s fight will prove the mettle of the Aes Sedai, and her conflict will decide the future of the White Tower—and possibly the world itself.

“The narration of this work is truly miraculous. Kate Reading and Michael Kramer breathe emotion and veracity into a varied cast of characters, deftly teasing out their complex ambitions and motivations...Both narrators bring intensity and passion to this much-loved series, giving nuanced performances even to minor characters.” —AudioFile

This feature require that you enable JavaScript in your browser.
END_OF_DOCUMENT_TOKEN_TO_BE_REPLACED

This feature require that you enable JavaScript in your browser.
END_OF_DOCUMENT_TOKEN_TO_BE_REPLACED

This feature require that you enable JavaScript in your browser.
END_OF_DOCUMENT_TOKEN_TO_BE_REPLACED