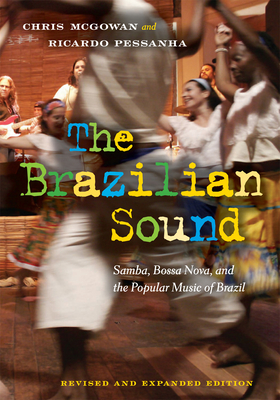 By Chris McGowan, Ricardo Pessanha
$40.95
Email or call for price/availability

Chris McGowan has written about Brazilian music for Billboard, Musician and many other publications, and contributed to The Encyclopedia of Latin American History and Culture. He blogs for the Huffington Post about Brazil and other subjects.

Ricardo Pessanha has worked as a Brazilian music consultant for foreign journalists, music producers and filmmakers and as a music lecturer for academic programs. He has been a translator and publicity writer for recording companies in Brazil and contributed articles to The Beat and other publications.

"Well informed, written in plain language and smartly illustrated, The Brazilian Sound quickly became a reference book after it was published in 1991. With the recent publication of a revised and expanded edition, the good just got better...The Brazilian Sound is an informative primer, clearly designed to be useful to the curious beginner, but also substantive enough to capture and hold the attention of the initiated. This new edition retains the easy-to-read quality of the original while adding not only new artists throughout but also historical and social context to the music.... For anyone interested in exploring the vast world of Brazilian music, The Brazilian Sound will serve nicely as a smart and practical road map." --Jazziz, February 2009

"An excellent resource on some of the most popular music in Brazil.... Clearly written and offering information valuable for understanding Brazilian music in general.... Anyone interested in the evolution of Brazilian popular music and some of its most prolific artists of the past centuries will appreciate this title. Summing Up: Highly recommended." --Choice, June 2009

“[T]his book has been revised and expanded again to be bigger and better than the previous highly praised incarnations. Ten years on, the music is still evolving, with many new artists and hybridizations, and McGowan and Pessanha are certainly keeping up with the changes. Their book features new coverage of funk, rap, and hip-hop and profiles new samba artists as well as artists on the rise in electronic dance music and other genres. Now that the Internet has made it easier to find and explore once-exotic musical genres, people looking for information about all the kinds of music in Brazil will love this book. Lavishly illustrated with 175 black-and-white photos, 12 maps, and 12 figures, it covers the remarkable breadth of Brazilian music in a highly readable, lively manner. Highly recommended for all public libraries and world music collections, even those owning an earlier edition."
— Library Journal

This feature require that you enable JavaScript in your browser.
END_OF_DOCUMENT_TOKEN_TO_BE_REPLACED

This feature require that you enable JavaScript in your browser.
END_OF_DOCUMENT_TOKEN_TO_BE_REPLACED

This feature require that you enable JavaScript in your browser.
END_OF_DOCUMENT_TOKEN_TO_BE_REPLACED