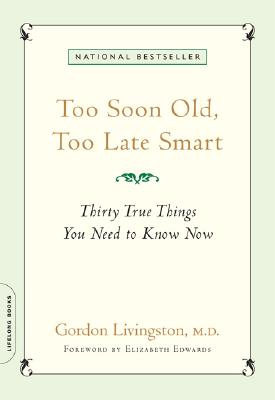 After service in Vietnam, as a surgeon for the 11th Armored Cavalry Regiment in 1968-69, at the height of the war, Dr. Gordon Livingston returned to the U.S. and began work as a psychiatrist. In that capacity, he has listened to people talk about their lives--what works, what doesn't, and the limitless ways (many of them self-inflicted) that people find to be unhappy.

He is also a parent twice bereaved; in one thirteen-month period he lost his eldest son to suicide, his youngest to leukemia. Out of a lifetime of experience, Gordon Livingston has extracted thirty bedrock truths, including:

Livingston illuminates these and twenty-four other truths in a series of carefully hewn, perfectly calibrated essays, many of which focus on our closest relationships and the things that we do to impede or, less frequently, enhance them. Again and again, these essays underscore that "we are what we do," and that while there may be no escaping who we are, we have the capacity to face loss, misfortune, and regret and to move beyond them--that it is not too late.

Full of things we may know but have not articulated to ourselves, Too Soon Old, Too Late Smart offers solace, guidance, and hope to everyone ready to become the person they'd most like to be.

Gordon Livingston, MD, a graduate of West Point and the Johns Hopkins School of Medicine who was awarded the Bronze Star for valor in Vietnam, was a psychiatrist and writer who contributed frequently to the Washington Post, San Francisco Chronicle, and Baltimore Sun. His books include Only Spring; Too Soon Old, Too Late Smart; And Never Stop Dancing; How to Love; and The Thing You Think You Cannot Do.

"The slim book by Columbia-based psychiatrist Gordon Livingston has been a source of inspiration for many."—Baltimore Sun

"The author creates an aura of wisdom about a great many things."
—Deseret Morning News

"[Livingston] underscores our capacity to face loss, tragedy, and regret, and our ability to move beyond them."
—Senior Digest

This feature require that you enable JavaScript in your browser.
END_OF_DOCUMENT_TOKEN_TO_BE_REPLACED

This feature require that you enable JavaScript in your browser.
END_OF_DOCUMENT_TOKEN_TO_BE_REPLACED

This feature require that you enable JavaScript in your browser.
END_OF_DOCUMENT_TOKEN_TO_BE_REPLACED