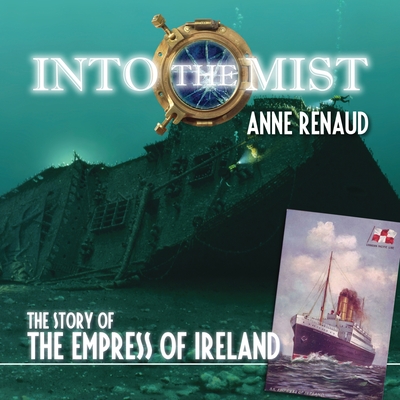 From 1906 to 1914, the Empress of Ireland, one of the fastest and most elegant liners of the Edwardian era, graced the waters of the Atlantic Ocean. Remembered primarily for sinking in only 14 minutes in the St. Lawrence River and for having a greater loss of passenger life than the Titanic, the Empress's true legacy is the significant role it played in the building of Canada.

During the ship's many crossings between Canada and England, it ferried royalty, politicians, scientists, authors, actors, captains of industry, and military servicemen aboard its decks, but most important, it carried more than 115,000 hopeful immigrants who left Europe to build new lives on Canadian soil.

Into the Mist is the story of the Empress of Ireland, of the many people who walked its decks, and how, in the early morning of May 29, 1914, it came to rest on the bottom of the St. Lawrence River.

Anne Renaud's previous books for young people include Pier 21: Stories from Near and Far, Island of Sorrow: The Story of Grosse ?le, and A Bloom of Friendship: The Story of the Canadian Tulip Festival. Her books have been shortlisted for numerous honours, including the Silver Birch Award, the Red Maple Award, and the Red Cedar Award. She lives in Westmount, Quebec.

"The many photographs and historical documents, such as advertisements and newspaper headlines, included in the book help the reader visualize the period, so that by the time the sinking is described, its tragedy seems all the more profound."

This feature require that you enable JavaScript in your browser.
END_OF_DOCUMENT_TOKEN_TO_BE_REPLACED

This feature require that you enable JavaScript in your browser.
END_OF_DOCUMENT_TOKEN_TO_BE_REPLACED

This feature require that you enable JavaScript in your browser.
END_OF_DOCUMENT_TOKEN_TO_BE_REPLACED