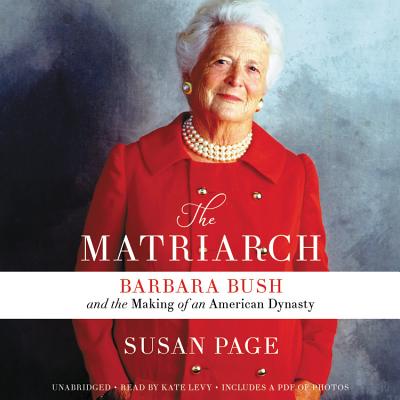 INSTANT NEW YORK TIMES BESTSELLER
"[The] rare biography of a public figure that's not only beautifully written, but also shockingly revelatory." -- The Atlantic
A vivid biography of former First Lady Barbara Bush, one of the most influential and under-appreciated women in American political history.

Barbara Pierce Bush was one of the country's most popular and powerful figures, yet her full story has never been told.
THE MATRIARCH tells the riveting tale of a woman who helped define two American presidencies and an entire political era. Written by USA TODAY's Washington Bureau chief Susan Page, this biography is informed by more than one hundred interviews with Bush friends and family members, hours of conversation with Mrs. Bush herself in the final six months of her life, and access to her diaries that spanned decades. THE MATRIARCH examines not only her public persona but also less well-known aspects of her remarkable life.
As a girl in Rye, New York, Barbara Bush weathered criticism of her weight from her mother, barbs that left lifelong scars. As a young wife, she coped with the death of her three-year-old daughter from leukemia, a loss that changed her forever. In middle age, she grappled with depression so serious that she contemplated suicide. And as first the wife and then the mother of American presidents, she made history as the only woman to see -- and advise -- both her husband and son in the Oval Office.
As with many women of her era, Barbara Bush was routinely underestimated, her contributions often neither recognized nor acknowledged. But she became an astute and trusted political campaign strategist and a beloved First Lady. She invested herself deeply in expanding literacy programs in America, played a critical role in the end of the Cold War, and led the way in demonstrating love and compassion to those with HIV/AIDS. With her cooperation, this book offers Barbara Bush's last words for history -- on the evolution of her party, on the role of women, on Donald Trump, and on her family's legacy.
Barbara Bush's accomplishments, struggles, and contributions are many. Now, Susan Page explores them all in THE MATRIARCH, a groundbreaking book certain to cement Barbara Bush as one of the most unique and influential women in American history.

Susan Page is the award-winning Washington Bureau chief of USA Today, where she writes about politics and the White House. Susan has covered six White House administrations and ten presidential elections. She has interviewed the past nine presidents and reported from six continents and dozens of foreign countries. She has appeared as an analyst on ABC's This Week, CBS' Face the Nation, CNN's State of the Union, Fox News Sunday, NBC's Meet the Press, PBS' NewsHour, NPR's The Diane Rehm Show, and other TV and radio programs. She lives in Washington, D.C.

"[A] highly readable portrait...Like the arc of her life itself, [Bush] created a bridge for first ladies that reached from traditional feminine pursuits to modern feminism. This definitive biography is a welcome contribution to our understanding of the complex role of presidential spouses."—The Washington Post

"The Matriarch will be read, and worth reading, for a long time to come."—Wall Street Journal

"Susan Page has given us an insightful and engaging portrait of a remarkable American. Wife to one President, mother to another, Barbara Bush was fascinating and complicated, and this absorbing biography brings the woman George H.W. Bush called 'the Silver Fox' to vivid life."
—Jon Meacham, Pulitzer Prize-winning and #1 New York Times bestselling author of Destiny and Power: The American Odyssey of George Herbert Walker Bush

"Formidable and fearless, candid and sharp, Barbara Bush was among the most interesting people of our time. Susan Page's intimate biography covers both the triumphs and tribulations that made her so fascinating and beloved."
—Walter Isaacson, Pulitzer Prize finalist and #1 New York Times bestselling author of Leonardo da Vinci, Steve Jobs, and Einstein

"What a fascinating read! By giving Page access to her diaries and agreeing to long interviews, Barbara Bush finally reveals the person behind the pearls. And she turns out to be one of the most interesting and influential women of the twentieth century."
—Cokie Roberts, New York Times bestselling author of Ladies of Liberty and political commentator for NPR and ABC News

"Except for Eleanor Roosevelt, first-rate biographies of First Ladies are rare. Susan Page's volume on Barbara Bush is an impressive exception. It is a beautifully written and informative study of not only Barbara Bush, but also the presidential administrations of her husband and son."
—Robert Dallek, Pulitzer Prize finalist and New York Times bestselling author of An Unfinished Life: John F. Kennedy, 1917-1963

"Barbara Bush was the wife of one president and the mother of another, but as Susan Page shows, was far more interesting than that. In the nick of time, Page managed to interview Mrs. Bush at length, gain access to her diaries, and acquire other information that many earlier authors did not have in order to bring us this highly readable portrait, which expands our understanding of this strong, decisive woman, whose influence spanned an era."
—Michael Beschloss, New York Times bestselling author of Presidents of War

"Insightful, touching, personal...this exceptionally readable Bush biography [is] unlike any you will read."—USA Today

"The Matriarch is the rare biography of a public figure that's not only beautifully written, but also shockingly revelatory."—The Atlantic

"A remarkable portrait of a woman who, even while shunning the spotlight, had a lasting impact on this country."
—Jennifer Palmieri

"...Richly researched, with so many new details."
—Norah O'Donnell

"An incredible look at one of the most powerful First Ladies in history. Go buy The Matriarch now."—Brad Meltzer, #1 New York Times bestselling author of The First Conspiracy

This feature require that you enable JavaScript in your browser.
END_OF_DOCUMENT_TOKEN_TO_BE_REPLACED

This feature require that you enable JavaScript in your browser.
END_OF_DOCUMENT_TOKEN_TO_BE_REPLACED

This feature require that you enable JavaScript in your browser.
END_OF_DOCUMENT_TOKEN_TO_BE_REPLACED