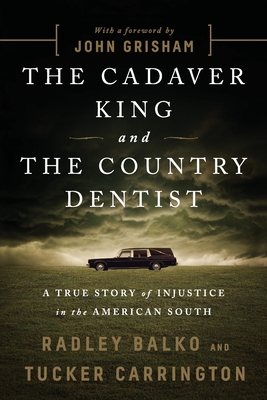 A shocking and deeply reported account of the persistent plague of institutional racism and junk forensic science in our criminal justice system, and its devastating effect on innocent lives

After two three-year-old girls were raped and murdered in rural Mississippi, law enforcement pursued and convicted two innocent men: Kennedy Brewer and Levon Brooks. Together they spent a combined thirty years in prison before finally being exonerated in 2008. Meanwhile, the real killer remained free.

The Cadaver King and the Country Dentist recounts the story of how the criminal justice system allowed this to happen, and of how two men, Dr. Steven Hayne and Dr. Michael West, built successful careers on the back of that structure. For nearly two decades, Hayne, a medical examiner, performed the vast majority of Mississippi's autopsies, while his friend Dr. West, a local dentist, pitched himself as a forensic jack-of-all-trades. Together they became the go-to experts for prosecutors and helped put countless Mississippians in prison. But then some of those convictions began to fall apart.

Here, Radley Balko and Tucker Carrington tell the haunting story of how the courts and Mississippi's death investigation system -- a relic of the Jim Crow era -- failed to deliver justice for its citizens. The authors argue that bad forensics, structural racism, and institutional failures are at fault, raising sobering questions about our ability and willingness to address these crucial issues.

Radley Balko is an investigative journalist and reporter at the Washington Post. He currently writes and edits the Watch, a reported opinion blog that covers civil liberties and the criminal justice system. He is the author of the 2013 book Rise of the Warrior Cop: The Militarization of America's Police Forces, which has won widespread acclaim, including from the Economist, New Yorker, Wall Street Journal, and Publishers Weekly, and was named one of the best investigative journalism books of the year by the Nieman Foundation at Harvard University.

Since 2006, Balko has written dozens of pieces on Hayne, West, and Mississippi's forensics disaster. His January 2013 investigation, "Solving Kathy Mabry's Murder: Brutal 15-Year-Old Crime Highlights Decades-Long Mississippi Scandal," was one of the most widely read Huffington Post articles of 2013. In 2015, Balko was awarded the Innocence Project's Journalism Award, in part for his coverage in Mississippi.

Tucker Carrington is the director of the George C. Cochran Innocence Project at the University of Mississippi School of Law. He has worked as a criminal defense lawyer for his entire legal career, most of it as a public defender in Washington, D.C.

"Of
all the tragedy documented in this book, surely the most pernicious is the unacknowledged
progression of discriminatory policies in the American criminal justice system.
The black men at the story's center were not snatched out of a Mississippi jail
and lynched. They were falsely imprisoned. They were haunted by state efforts
to execute them for three decades. This is a powerful and instructive story,
masterfully told by Balko and Carrington."—IbramX. Kendi, National Book Award-winning author of Stamped from theBeginning: The Definitive History of Racist Ideas in America

"The Cadaver King and the Country Dentist paints a devastating picture of Mississippi's ongoing systemic abuse of junk evidence by medical examiners and highlights the myriad ways the current legal and political systems reward certain and speedy convictions. This carefully constructed and highly-readable account also reveals the ways in which catastrophic and almost comic expert errors can lead to hasty conclusions, ruined lives, and may take years to correct, if they are corrected at all."—DahliaLithwick, Senior Editor, Slate

"If, like most Americans, you think that our legal system protects innocent people from being falsely convicted, be prepared to have your faith shattered. In horrifying detail, Radley Balko and Tucker Carrington show how structural racism, junk science, overzealous prosecutors, compliant judges, and a bloodthirsty press conspired to wreck lives and convict the innocent. Grounded in Mississippi courtrooms, but with national implications, this bookwill leave you outraged and hungry for change."—JamesForman, Jr., Professor, Yale Law School and author of Locking Up OurOwn: Crime and Punishment in Black America

"A haunting true-crime tale of systemic incompetence and racism...Balko
and Carrington have written a cry for help."—The New York Times

"A superb work of investigative reporting....Balko and Carrington combine
expertise, industry and outrage into a searing narrative."—Wall Street Journal

"A
horrifying exposé of how a few individuals can infect an entire state's
criminal justice system."—Kirkus Reviews, *Starred Review*

"Through
the intensive scrutiny of how the men were speedily tried, convicted, and then
released after years in prison, the authors uncover an unholy alliance of
racist cops and prosecutors with questionable death investigations and
misapplied forensics. This work should spark both admiration and outrage-and,
one hopes, reform."—Booklist

END_OF_DOCUMENT_TOKEN_TO_BE_REPLACED

This feature require that you enable JavaScript in your browser.
END_OF_DOCUMENT_TOKEN_TO_BE_REPLACED

This feature require that you enable JavaScript in your browser.
END_OF_DOCUMENT_TOKEN_TO_BE_REPLACED

This feature require that you enable JavaScript in your browser.
END_OF_DOCUMENT_TOKEN_TO_BE_REPLACED