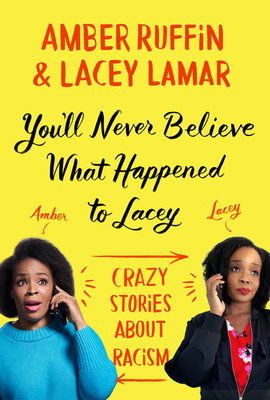 “I didn’t think it was possible to combine education and humor so effectively in a book about racism, but Ruffin and Lamar proved me wrong. This incredibly well-structured, digestible, challenging, and engaging book opened my eyes to the many ways racism can permeate every interaction in Black people’s lives. The way the sisters play off each other and how Ruffin reflects on Lamar’s experience in contrast to her own make the book especially accessible. A must-read!”
— Emily Autenrieth, A Seat at the Table Books, Elk Grove, CA

Writer and performer on Late Night with Seth Meyers Amber Ruffin writes with her sister Lacey Lamar with humor and heart to share absurd anecdotes about everyday experiences of racism.

Now a writer and performer on Late Night with Seth Meyers and host of The Amber Ruffin Show, Amber Ruffin lives in New York, where she is no one's First Black Friend and everyone is, as she puts it, "stark raving normal." But Amber's sister Lacey? She's still living in their home state of Nebraska, and trust us, you'll never believe what happened to Lacey.

From racist donut shops to strangers putting their whole hand in her hair, from being mistaken for a prostitute to being mistaken for Harriet Tubman, Lacey is a lightning rod for hilariously ridiculous yet all-too-real anecdotes. She's the perfect mix of polite, beautiful, petite, and Black that apparently makes people think "I can say whatever I want to this woman." And now, Amber and Lacey share these entertainingly horrifying stories through their laugh-out-loud sisterly banter. Painfully relatable or shockingly eye-opening (depending on how often you have personally been followed by security at department stores), this book tackles modern-day racism with the perfect balance of levity and gravity.

Amber Ruffin is the host of The Amber Ruffin Show on NBC's streaming service, Peacock, and a writer and cast member on NBC's Late Night with Seth Meyers. She also amazingly became the first black woman to write for a late-night talk show in American history when she joined Seth's staff in 2014, and was a writer/sometimes performer on HBO's Black Lady Sketch Show.

Lacey Lamar is Amber Ruffin's big sister. She has worked in the healthcare and human service field for more than twenty-five years, thirteen of those working with troubled youth in her community. She volunteers her time and resources to black, brown refugee and indigenous fellow humans in any way she can. Lacey lives in Nebraska with her unbelievable amazing daughter Imani and their 130lb Great Dane Izzy.

"The book is a portrait of one person’s struggle to maintain dignity, strength and self-respect when faced with injustices small and large—all told with Ruffin’s irreverent, sardonic style."—People

“This timely and timeless book is hilarious, insightful, aggravating and comforting in equal measure.”—Salon

"Laughter is absolutely healing...[You'll Never Believe What Happened to Lacey] reminds Black women that they can count on each other to understand."—PopSugar

"I
dare you to read this hilarious and eye-opening book and not become obsessed
with Amber Ruffin."—Mindy Kaling

"If
you laugh half as hard as I did at the FIRST story in this book, let alone the rest of the book, you will have
gotten your money's worth. The stories made me laugh and they made me sad. I
know I'm not the only one to experience these kinds of moments but it helps to
know that someone else-poor little Black Lacey taking on the lion's share of
Nebraska's white ignorance all by her lonesome- experiences it too. From the
mental gymnastics needed to call a black store dirty then drive out of state in
order to avoid said dirt only to wind up shopping in a sty operating in a white
neighborhood to having the gall to try and holluh at black women on a dating
app when your profile pics have the confederate flag in them, Amber & Lacey
point out how white folks are apparently doing the most in them parts."—Retta, comedian andactress (Parks & Recreation, Good Girls)

"The
message of this book is for ALL of us and no matter why YOU'RE here --
perhaps
you're a fan of Amber Ruffin's comedy, or a Seth Meyers' fan, or a
personal
friend of Lacey's, or maybe you're just a person browsing for a book
that will help you understand the Black experience in America and the
other ones seem too
much like school -- I urge you to BUY THIS BOOK. The stories are
delivered with
the humor and horror they deserve. You will laugh, you will be enraged,
and if
you are a white person, you will understand more than you did before
about the truth of being Black in
America -- even if you thought you understood a lot already because you
read the
hard school books."—Busy Philipps, author, actor,white lady

"Amber and Lacey have the
gift of making you comfortable enough to laugh at events that will also make
you cringe. This book is an opportunity for black people to know you're not
alone in how you've experienced the world. And for everyone this book is a
chance to see a layer of this world that you might have been blind to. You'll
leave both with a laugh and a little more knowledge."—Roy Wood, Jr., correspondent, The Daily Show with Trevor Noah

"Both maddening and funny, an eye-opening look at how its daily targets cope with racism."—Kirkus Reviews (starred review)

"A must-read that will have Black women feeling seen and heard, and will allow others to better understand the effects of racism. With YA crossover appeal, this is also an excellent choice for book clubs."—Library Journal (starred review)

“Featuring the authors' razor-sharp wit and limitless brilliance, these true tales of injustice are a gift to readers.”—Booklist (starred review)

"Expertly balancing laugh-out-loud humor and descriptions of deplorable actions...While the writing is consistently funny, the severity of the racism is never downplayed; Ruffin and Lamar show the necessity of embracing humor as a coping mechanism...This is an excellently executed account, rich with vivid insight."—Publishers Weekly (starred review)

"Amber and Lacey hysterically walk us through a minefield of empirically traumatizing events, finding a way to make us laugh while weeping for the state of our nation; a place where two brilliant women are made to feel that somehow it is they who are missing the mark."—Natasha Lyonne, quadruplethreat, noted surrealist

This feature require that you enable JavaScript in your browser.
END_OF_DOCUMENT_TOKEN_TO_BE_REPLACED

This feature require that you enable JavaScript in your browser.
END_OF_DOCUMENT_TOKEN_TO_BE_REPLACED

This feature require that you enable JavaScript in your browser.
END_OF_DOCUMENT_TOKEN_TO_BE_REPLACED