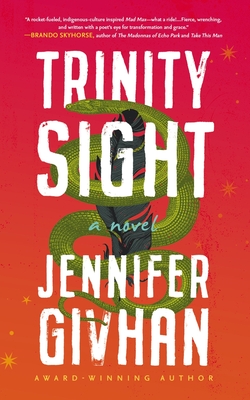 Lyrical language and indigenous traditions elevate a typical dystopian road trip into something more nuanced. The story opens with hints of societal breakdowns caused by climate change. Archeologist Calliope Santiago is driving in New Mexico when long-dormant volcanoes erupt. Along with burning buildings, unbelievably, almost everyone disappears. Calliope, pregnant with twins, can't find her family. She and two surviving neighbors set out to search for their kin. Ghosts, dreams and murderous mythical creatures stalk the small group. None of it makes sense to Calliope, who doesn't believe in the Christian Rapture story but, as one indigenous survivor tells her, "The white man's bible is only one end-of-the world myth." This is an original, emotional story written by a master of imaginative language.

"Our people are survivors," Calliope's great-grandmother once told her of their Puebloan roots--could Bisabuela's ancient myths be true?

Anthropologist Calliope Santiago awakens to find herself in a strange and sinister wasteland, a shadow of the New Mexico she knew. Empty vehicles litter the road. Everyone has disappeared--or almost everyone. Calliope, heavy-bellied with the twins she carries inside her, must make her way across this dangerous landscape with a group of fellow survivors, confronting violent inhabitants, in search of answers. Long-dead volcanoes erupt, the ground rattles and splits, and monsters come to ominous life. The impossible suddenly real, Calliope will be forced to reconcile the geological record with the heritage she once denied if she wants to survive and deliver her unborn babies into this uncertain new world.

Rooted in indigenous oral-history traditions and contemporary apocalypse fiction, Trinity Sight asks readers to consider science versus faith and personal identity versus ancestral connection. Lyrically written and utterly original, Trinity Sight brings readers to the precipice of the end-of-times and the hope for redemption.

END_OF_DOCUMENT_TOKEN_TO_BE_REPLACED

This feature require that you enable JavaScript in your browser.
END_OF_DOCUMENT_TOKEN_TO_BE_REPLACED

This feature require that you enable JavaScript in your browser.
END_OF_DOCUMENT_TOKEN_TO_BE_REPLACED

This feature require that you enable JavaScript in your browser.
END_OF_DOCUMENT_TOKEN_TO_BE_REPLACED