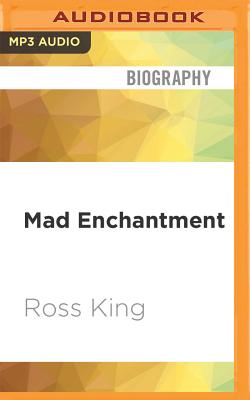 By Ross King, Joel Richards (Read by)
$9.99
Email or call for price/availability

We have all seen, whether live, in photographs or on postcards, some of Claude Monet's legendary water lily paintings. They are in museums all over the world and are among the most beloved works of art of the past century. Yet, ironically, these soothing images were created amid terrible personal turmoil and sadness.

The extraordinarily dramatic history behind the creation of these paintings is little-known; Ross King's new audiobook tells that story for the first time and, in the process, presents a compelling and original portrait of one of our most beloved artists.

King tells the full history of the special circumstances in which Monet created the Water Lilies. As World War I exploded within hearing distance of his house at Giverny, he was facing his own personal crucible. In 1911, aged 71, his adored wife, Alice, died, plunging him into deep mourning. A year later he began going blind. Then his eldest son, Jean, fell ill and died of syphilis, and his other son was sent to the front to fight for France.

Within months a violent storm destroyed much of the garden that had been his inspiration for some 20 years. At the same time, his reputation was under attack, as a new generation of artists, led by Pablo Picasso and Henri Matisse, were dazzling the art world and expressing disgust with Impressionism.

Against all this, fighting his own self-doubt, depression, and age, Monet found the wherewithal to construct a massive new studio, 70 feet long and 50 feet high, to accommodate the gigantic canvases that would, he hoped, revive him.

Using letters, memoirs, and other sources not employed by other biographers, and focusing on this remarkable period in the artist's life, Ross King reveals a more complex, more human, more intimate Claude Monet than has ever been portrayed and firmly places his water lily project among the greatest achievements in the history of art.

This feature require that you enable JavaScript in your browser.
END_OF_DOCUMENT_TOKEN_TO_BE_REPLACED

This feature require that you enable JavaScript in your browser.
END_OF_DOCUMENT_TOKEN_TO_BE_REPLACED

This feature require that you enable JavaScript in your browser.
END_OF_DOCUMENT_TOKEN_TO_BE_REPLACED