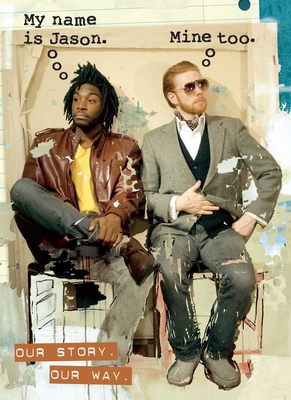 A stunning visual autobiography of two crazy-talented besties, bestselling and award-winning author Jason Reynolds and painter Jason Griffin, who could never be who they are singularly if they weren’t who they were together.

Once upon a time in America, there were two Jasons. Jason Reynolds and Jason Griffin. One a poet. One an artist. One Black. One white. Two voices. One journey in mind: to move to New York, the city of dreams, to make their own dreams come true. Willing to have a life not un-hard, so long as it wasn’t unhappy. Willing to let the city swallow them whole, so long as it gives them their chance. They had each other. “What if painting was a sin, and the poetry became taboo. And no one ever clapped for me again. My question is, would you?”

Jason Reynolds is a #1 New York Times bestselling author, a Newbery Award Honoree, a Printz Award Honoree, a two-time National Book Award finalist, a Kirkus Award winner, a Carnegie Medal winner, a two-time Walter Dean Myers Award winner, an NAACP Image Award Winner, a two-time Odyssey Award Honoree, the recipient of multiple Coretta Scott King honors, and the Margaret A. Edwards Award. He was also the 2020–2022 National Ambassador for Young People’s Literature. His many books include All American Boys (cowritten with Brendan Kiely); When I Was the Greatest; The Boy in the Black Suit; Stamped; As Brave as You; For Every One; the Track series (Ghost, Patina, Sunny, and Lu); Look Both Ways; Stuntboy, in the Meantime; Ain’t Burned All the Bright, and My Name Is Jason. Mine Too. (both cowritten with Jason Griffin); and Long Way Down, which received a Newbery Honor, a Printz Honor, and a Coretta Scott King Honor. He lives in Washington, DC. You can find his ramblings at JasonWritesBooks.com.

Jason Griffin won a Caldecott Honor for his artwork in Ain’t Burned All the Bright, written by Jason Reynolds, and also illustrated Reynolds’s My Name Is Jason. Mine Too. He’s an artist and master collaborator, who has shown his art in major cities all over the world. His most recent projects include a commissioned mural for the children’s cancer wing at Montefiore Hospital in the Bronx, as well as a residency at the new contemporary art museum in Amsterdam, Het HEM. He currently creates in Queens, New York.

An eye-opening portrait-of-the-artists archive filled with memories, ephemera, and optimism (and appended with a new afterword by Reynolds and Griffin).
— Horn Book, Book Bundle: Online Exclusive

An artful collaboration; a love story. Two Jasons share their singular experiences with all those who value art.

This compact, inspirational volume stands as a testament to the value of artistic expression and the power of friendship in self-discovery.
— Publishers Weekly, *STARRED REVIEW*

This feature require that you enable JavaScript in your browser.
END_OF_DOCUMENT_TOKEN_TO_BE_REPLACED

This feature require that you enable JavaScript in your browser.
END_OF_DOCUMENT_TOKEN_TO_BE_REPLACED

This feature require that you enable JavaScript in your browser.
END_OF_DOCUMENT_TOKEN_TO_BE_REPLACED