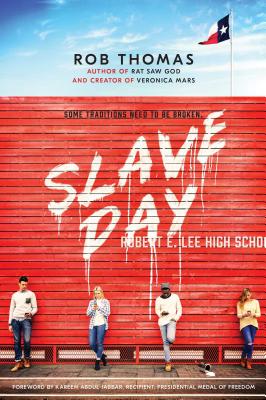 From the creator of Veronica Mars comes a timely novel that looks at a high school fundraising tradition of auctioning off students as “slaves.”

At Robert E. Lee High School, the traditional fundraising event is Slave Day, in which the student leaders and faculty are auctioned off as slaves for the winning bidders. Keene Davenport is outraged and plans to stay home to protest this racist practice. But his mom won’t let him skip school, and he finds that none of his classmates took his protest seriously. So instead he decides on an alternative path of civil disobedience—he will “buy” Shawn Greeley, the school’s first black student body president.

Told in eight alternating perspectives, Slave Day is a powerful novel featuring beauty queens, geeks, class clowns, and football players—and none of them will come out of it the same.

Rob Thomas is the creator and executive producer of the television series Veronica Mars. He is also a cocreator and executive producer of the cable television series Party Down. In addition to his television work, Thomas is the author of five young adult books including Rats Saw God, Slave Day, Satellite Down, and Doing Time: Notes From the Undergrad. He lives in Austin, Texas, with his wife Katie, daughter Greta, and son Hank. Visit him at SlaveRats.com.

This feature require that you enable JavaScript in your browser.
END_OF_DOCUMENT_TOKEN_TO_BE_REPLACED

This feature require that you enable JavaScript in your browser.
END_OF_DOCUMENT_TOKEN_TO_BE_REPLACED

This feature require that you enable JavaScript in your browser.
END_OF_DOCUMENT_TOKEN_TO_BE_REPLACED